The United Nations has begun its work of providing international assistance to the Pacific islands of Fiji, hit by a powerful tropical cyclone that left at least 28 people dead and some 14,000 people sheltering in evacuation centres.

According to the UN Office for the Coordination of Humanitarian Affairs (OCHA), the UN Pacific Humanitarian Team (PHT) and new partners arriving in Fiji are requested to work through Fiji’s existing operational structure to allow for a coordinated and effective response.

It has been agreed that OCHA will be the conduit for communications between Fiji’s National Disaster Management Office and international humanitarian partners regarding offers of assistance.

New Zealand has offered aid exceeding $2 million (NZD). Its 13-strong response team aboard a plane carrying 12 tonnes of supplies, requested by the Fiji Government, including water containers, tarpaulins, generators, chainsaws and tool kits arrived at Nausori airport in the capital city of Suva on Monday.

Australia will also be supplying military helicopters to assist with aerial surveillance, as well as air transport of relief supplies for 1500 families, as part of a $5 million (AUD) assistance package.

The UN Children’s Fund (UNICEF) has agreed to assist with the rollout of child friendly spaces in evacuation centres.

“In the immediate aftermath of a disaster such as a cyclone, UNICEF’s first priority is to ensure the protection and wellbeing of the most vulnerable, including children, pregnant women and new mothers,” said UNICEF Pacific Deputy Representative Isabelle Austin.

She also said that agency is working around the clock preparing supplies for transport and distribution through the Government of Fiji, which is providing extremely strong leadership on this response.

Children, families and communities across Fiji will require extensive support to meet growing and urgent needs around water, sanitation and hygiene, including the provision of water containers, purification tablets, soap and temporary sanitation facilities.

The World Health Organization (WHO) has received a request for 36 000 water purifying tablets, while the UN Entity for Gender Equality and the Empowerment of Women (UN Women), and UNICEF have been asked to co-lead the national safety and protection cluster.

Severe Tropical Cyclone Winston cut a path of destruction across the country on 20-21 February.

Almost 14,000 people are sheltering in 274 evacuation centres around Fiji. At least 364 dwellings have been destroyed, and 65 schools have been damaged or destroyed. Schools have been closed for the week and the Government has indicated that restoring education is its top priority for the response over the coming days.

The Government has declared a 30-day “state of natural disaster,” and launched an appeal for public donations to assist victims of the cyclone.

UN relief chief saddened by deaths due to cyclone in Bangladesh, India 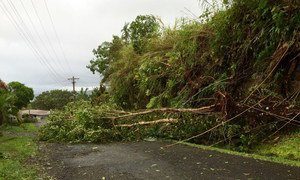 The United Nations has begun its assessment of the needs for international assistance to the islands of Fiji, hit by a powerful tropical cyclone that left at least 21 people dead and more than 8,000 people sheltering in evacuation centres over the weekend.