The United Nations has begun its assessment of the needs for international assistance to the islands of Fiji, hit by a powerful tropical cyclone that left at least 21 people dead and more than 8,000 people sheltering in evacuation centres over the weekend.

Responding to the Government of Fiji’s official request for international aid, the UN and its Pacific Humanitarian Team are reaching out to the authorities to determine what expertise and support they need, including in coordination of humanitarian assistance, said Osnat Lubrani, UN Resident Coordinator in Fiji.

“The images emerging from early aerial assessments of affected areas are truly heartbreaking, leaving little doubt about the ferocity of this cyclone,” Ms. Lubrani said in a press release.

“It is clear from these catastrophic impacts that Fiji is facing a long road to recovery and the United Nations and the entire Pacific Humanitarian Team stands should-to-shoulder with the Government as they begin this enormous task,” she stressed.

On 20 and 21 February, Category 5 Tropical Cyclone Winston cut a path of destruction across Fiji’s islands, blowing off roofs, bringing down trees and powerlines, and flooding rivers.

More than 8,100 people are currently sheltering in evacuation centres, and 4 people are still missing. Schools are closed for a week to allow for clean-up and their use as evacuation centres. Whole villages have been destroyed on the island of Koro where a relief and assessment ship is being deployed, according to the UN Office for the Coordination of Humanitarian Affairs (OCHA).

The Government is leading the response, and a 30-day state of natural disaster has been declared.

“Government assessments have begun and these will give a clearer picture of where people are most in need. Help is already on its way to the Lomaiviti Group which was in the eye of the cyclone and suffered catastrophic impacts,” Ms. Lubrani said.

The Pacific Humanitarian Team, based in the Fijian capital, Suva, coordinates expert human resources and relief supplies regionally and globally, should the impacts of a disaster exceed a government’s capacity to respond.

The United Nations Children’s Fund (UNICEF) said yesterday that it is on stand-by to provide emergency supplies and additional personnel to support the Government as it works to determine critical needs.

At its peak, the Cyclone was forecast by the Fiji Met Service to have sustained winds of 230 kmph, gusting to 325 kmph making it one of the most severe cyclones ever to hit the South Pacific.

Meanwhile, the head of the UN Office for Disaster Risk Reduction, Mr. Robert Glasser, today extended his condolences to Fiji on the loss of life from the cyclone while commending the Government for its efforts to reduce mortality and the numbers of people affected by cyclone.

“Our heartfelt condolences go out to the families who have lost loved ones,” Mr. Glasser said, adding that the death toll could have been significantly higher if the Government, the National Disaster Management Centre and the Meteorological Service had not united in their efforts to disseminate warnings and urge the population to use the 735 evacuation centres opened in advance of the cyclone’s arrival.

A key target of the Sendai Framework for Disaster Risk Reduction adopted in March last year as a global blueprint for reducing disaster risk and disaster losses is to ensure that fewer people lose their lives or get injured in these types of events which are becoming more intense as a result of climate change, he said.

According to the Office, there were 90 major storms recorded last year with a reported death toll of 996, significantly down on the ten year average of 17,778.

Also extending heartfelt condolences, President of the UN General Assembly, Mogens Lykketoft, praised the people and Government of Fiji for their fortitude and resilience and assured them of the support of the international community, as they begin the process of recovering from this devastating storm. 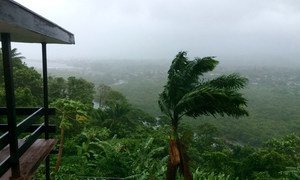 Fiji: UNICEF on stand-by with supplies and personnel in wake of Cyclone Winston

In the wake of Tropical Cyclone Winston that struck the island nation of Fiji Saturday night, the United Nations Children's Fund (UNICEF) said it is on stand-by to provide emergency supplies and additional personnel to support the Government as it works to determine critical needs.