UNAMI
An increasing number of people, including families with children and the elderly, have encountered deadly ambushes as they try to escape areas controlled by the Islamic State of Iraq and the Levant (ISIL).
22 February 2016

The top United Nations humanitarian official in Iraq has said she is deeply worried about thousands of civilians who are trapped in Fallujah city and in Sinjar district and are unable to access aid, calling on Government officials to redouble efforts to relocate civilians to safer areas before the situation deteriorates further.

Although the UN is unable to access civilians in Fallujah city in Anbar Governorate, which remains under the control of the Islamic State of Iraq and the Levant (ISIL), information from key informants indicates that conditions are deteriorating rapidly, said Lise Grande, the UN's Humanitarian Coordinator for Iraq, in a press release.

“We are receiving reports of hunger and shortages of medicines and essential supplies. We know that people are trying to leave the city but are prevented from doing so; we fear that the situation is becoming desperate,” Ms. Grande said.

As she called on the Government of Iraq and the Kurdistan Regional Government to uphold their obligations under humanitarian law and redouble their efforts to facilitate the evacuation and relocation of civilians to safer areas with food, water and medical care, Ms. Grande stressed that urgent steps are necessary to alleviate the suffering of people struggling to survive in the country.

“As humanitarians, we have a common responsibility to save lives,” she said.

Ms. Grande said she is also profoundly worried about the situation in Ninewa Governorate, where more than 520 people, including an estimated 250 children, have been stranded for three months between military frontlines east of Sinjar Mountain.

“It's the middle of winter and these people are unable to access food, water, shelter and medical assistance. Ensuring that civilians are safe is one of our highest priorities,” Ms. Grande emphasized.

Allowing families to cross into Government-controlled areas would “dramatically” improve the situation, Ms. Grande said, calling on all parties to do whatever is necessary to ensure that civilians are protected.

More than 3 million people have been forced to flee their homes in Iraq since January 2014. The UN estimates that an additional 3 million people are living under ISIL control in Iraq. More than 500,000 civilians have returned to their homes following military campaigns to bring areas under Government control. 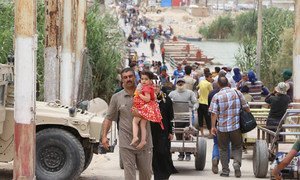