UN Assistant Secretary-General, Khaled Khiari, noted that while the situation remains volatile and uncertain, there has been “an encouraging surge of diplomatic activity” in recent weeks.

Turkey launched the military offensive earlier this month just days after the United States announced it was withdrawing its troops from the region, where they had been fighting the terrorist group ISIL alongside Kurdish militia.

Last week, Turkey and the US agreed to a five-day pause in the fighting to allow Kurdish fighters to withdraw from a so-called “safe zone”.

This past Tuesday, Turkey and Russia agreed a deal that would allow Russian military police and Syrian border guards into the area, among other measures.

“The United Nations takes note of these agreements and welcomes any efforts to de-escalate the situation in line with the UN Charter and to protect civilians in accordance with international humanitarian law,” said Mr. Khiari.

“The United Nations also takes note of Turkey’s announcement that ‘at this stage, there is no further need to conduct a new operation outside the present operation area.’

The military operation “has severely impacted the humanitarian situation”, according to Ursula Mueller, the number two official in the UN humanitarian affairs coordination office, OCHA.

In the last two weeks alone, nearly 180,000 people fled the border areas between Turkey and Syria. A reduction in fighting means some have begun to return.

“As the situation evolves, a critical challenge facing humanitarian actors is the need to scale up operations from within Syria,” said Ms. Mueller.

“To achieve this, we will need all parties to facilitate safe, rapid and unimpeded humanitarian access via land and air routes to transport humanitarian supplies, along with an expansion of humanitarian capacity in the northeast.”

Explosive hazards such as mines are also impeding humanitarian access in Syria, in addition to injuring and killing civilians.

The military developments in the northeast prompted international mine action NGOs to evacuate the area, said Agnes Marcaillou, Director of the UN Mine Action Service (UNMAS).

Although not present there, UNMAS has contributed to the ongoing humanitarian response in the northeast by providing informational material for local communities.

Ms. Marcaillou reported that so far this year, Syria has recorded an average of 184 explosive incidents per day.

“The contamination severely impacts the lives and livelihoods of the population and further amplifies the social and economic crisis,” she said. 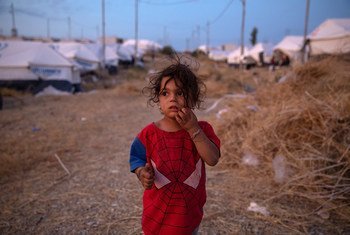 After nearly two weeks of fighting in northeast Syria, the UN’s humanitarian wing has estimated that around 180,000 have been forced to leave their homes or shelters, including 80,000 children, all in desperate need of humanitarian assistance.