Following a humanitarian breakthrough in delivering aid to a Syrian town inaccessible for more than 18 months, the United Nations food relief agency is now planning possible air-drops for 200,000 people in the Deir ez-Zor area besieged by the Islamic State of Iraq and the Levant, or ISIL/Da’esh.

“It would be a high altitude operation, dropping food with parachutes,” World Food Programme (WFP) spokesperson Bettina Luescher said today in a briefing to the press.

WFP is considering using an experienced, registered company for the complex operation, but no details could be provided as it is “still in the planning stage,” she said. WFP would work with the Syrian Arab Red Crescent on this project, as part of a larger international effort. The situation in Deir ez-Zor is devastating for families living under siege, where food is sometimes sold at prohibitively high prices, she said.

She also said that life-saving aid had reached more than 21,000 people in Moadamiyeh, an area inaccessible to WFP aid for over a year and a half. Families there received two bags of wheat flower and other food items, including rice, lentils, canned food and cooking oil. WFP had also sent date bars that were fortified with vitamins and minerals.

Meanwhile, Staffan de Mistura, UN Special Envoy for Syria, was headed to Geneva earlier today to attend a meeting of the international coordinating group tasked with implementing a ceasefire in Syria, according to Michele Zaccheo, Chief of the Radio and TV Section at the UN Information Service in Geneva.

The Ceasefire Task Force meeting was planned for the afternoon, and would be attended by the International Syria Support Group (ISSG), comprising the Arab League, the European Union, the United Nations, and 17 countries including the United States and Russia. Mr. Zaccheo said that there was no information that the meeting was cancelled as reported by some media.

Regarding the resumption of the intra-Syrian talks, there has been no confirmed date, he said, noting that the Special Envoy would address the media on 22 February, probably in the morning, at a time to be specified.

Christophe Boulierac, spokesperson for the UN Children’s Fund (UNICEF), informed that 37,000 of the 82,000 people in five besieged towns reached earlier this week by the UN and its partners were children. The aid had reached the towns of Madaya, Foah and Kfreya, Moademiyeh, and Zabadani, he said.

Over two million people continue to face critical drinking water shortages in the Aleppo Governorate, he added. Khafsa water treatment facility in Aleppo was shut down on 16 January. In response, UNICEF scaled up its water tracking operations to provide eight million litres a day, enough to meet drinking needs of over 530,000 people and fuel to operate ground water wells, he said.

In cooperation with the International Committee of the Red Cross, UNICEF was rehabilitating the Ein Al Beida water pumping station. In the south of the country, in De’ra, UNICEF had provided emergency health kits for 35,000 people to six local clinics. UNICEF and partners have sent education supplies for 8,800 children and distributed family hygiene kits for 45,000 people and baby kits for 3,000 children, and 3,500 testers for water quality. Water quality assurance and surveillance services were ongoing, he said. 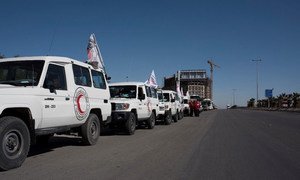 As United Nations inter-agency convoys completed the delivery of humanitarian aid to more than 80,000 Syrians in five besieged towns, the UN Special Envoy for Syria today said the idea of air drops to locations that have yet to be reached “has become a very concrete proposal.”