WFP/Gregory Barrow
In Malawi, a woman picks up her monthly ration of supercereal.
12 February 2016

Over the coming year, humanitarian partners should prepare for food insecurity levels and food insecure population numbers in southern Africa to be at their highest levels since the 2002-2003 food crisis, the United Nations agriculture agency warned today, citing an 'intense' drought as the main cause.

Southern Africa is currently in the grip of a drought that has expanded and strengthened since the earliest stages of the 2015-2016 agricultural season, driven by one of the strongest El Niño events of the last 50 years, the UN Food and Agriculture Organization (FAO) said today in a joint statement with the World Food Programme (WFP), Famine Early Warning Systems Network (FEWS NET), and the European Commission's Joint Research Centre (JRC).

Across large swathes of Zimbabwe, Malawi, Zambia, South Africa, Mozambique, Botswana, and Madagascar, the current rainfall season has so far been the driest in the last 35 years. Agricultural areas in northern Namibia and southern Angola have also experienced high levels of water deficit.

Much of the southern African sub-region has consequently experienced significant delays in planting and very poor conditions for early crop development and pasture re-growth. In many areas, planting has not been possible due to 30 to 50 day delays in the onset of seasonal rains resulting in widespread crop failure, according to the agencies.

Although there has been some relief since mid-January in certain areas, the agencies warn that the window of opportunity for the successful planting of crops under rain-fed conditions is nearly closed. Even assuming normal rainfall for the remainder of the season, cropwater balance models indicate poor performance of maize over a widespread area. 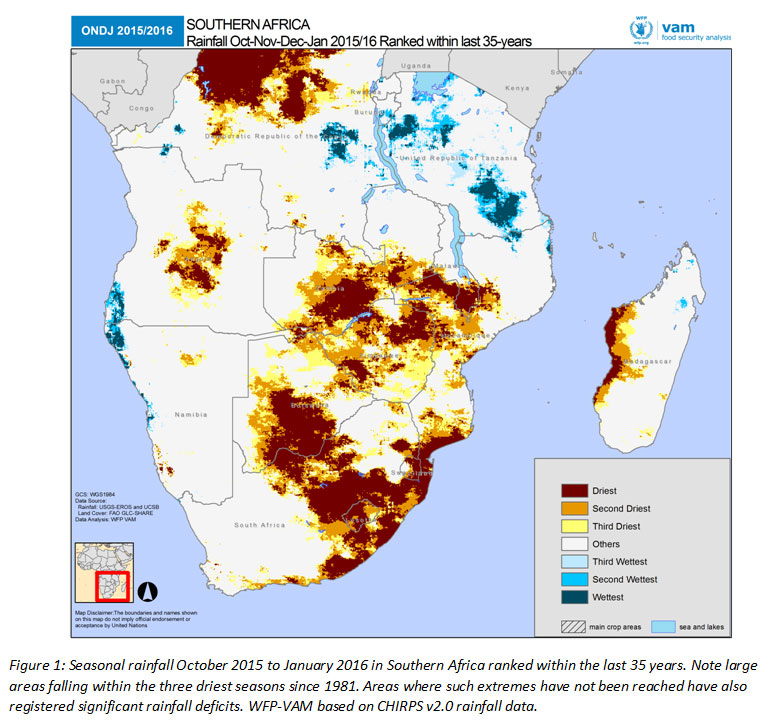 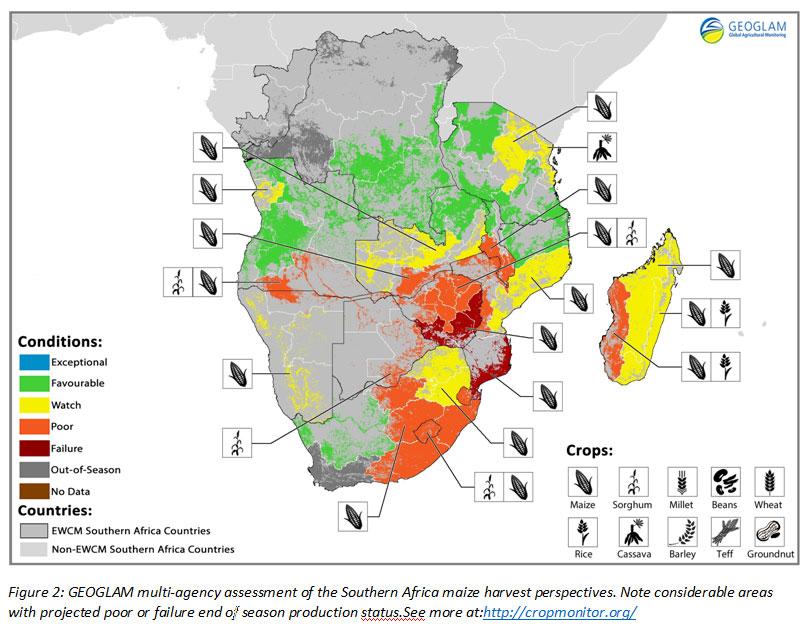 Seasonal forecasts from a variety of sources are unanimous in predicting a continuation of below-average rainfall and above-average temperatures across most of the region for the remainder of the growing season, says the statement.

The combination of a poor 2014-2015 season, an extremely dry early season (October to December) and forecasts for continuing hot and drier-than-average conditions through mid-2016, suggest a scenario of extensive, regional-scale crop failure.

Drought emergencies have been declared in most of South Africa's provinces as well as in Zimbabwe and Lesotho. Water authorities in Botswana, Swaziland, South Africa and Namibia are limiting water usage because of low water levels. Power outages have been occurring in Zambia and Zimbabwe as water levels at the Kariba Dam have become much lower than usual.

While it is too early to provide detailed estimates of the population likely to be food-insecure in 2016-2017, FAO and its partners say it is expected that the population in need of emergency food assistance and livelihood recovery support will increase significantly. Additional assistance will be required to help food-insecure households manage an extended 2016 lean season.

In the short term, the agencies recommend: continued close monitoring of the season to inform decision-making on programming and targeting; immediate additional assistance to help currently food-insecure households; updating of contingency plans, intensification of advocacy and resource mobilization to address the impact of an extended post-2016 harvest lean season; and increased awareness-raising of the need for a regional approach to address the effects of drought that are becoming more frequent and intense. 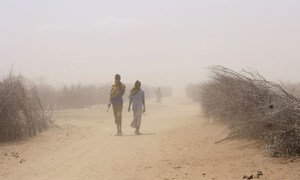