The appointment is part of a series on measures being taken following reports of abuse by international peacekeeping forces in the Central African Republic (CAR), the latest of which surfaced last week with the UN Mission in CAR (MINUSCA) identifying seven new possible victims.

The High-Level External Independent Review Panel on Sexual Exploitation and Abuse by International Peacekeeping Forces in the Central African Republic submitted its report on 17 December 2015.

The Secretary-General is committed to ensuring that the systemic issues, fragmentation and other weaknesses identified are fully addressed in a timely manner and, in so doing, to uphold the trust that must underpin all international engagements,” said a note issued on Ms. Lute's appointment as Special Coordinator on improving the UN response to sexual exploitation and abuse.

“During 2016, Ms. Lute will support the ongoing efforts of the Secretary-General and the leadership of UN Offices, Departments, Funds and Programmes to better align our peacekeeping and human rights systems and to strengthen United Nations response to sexual exploitation and abuse,” said the note.

Ms. Lute, currently Chief Executive Officer of the Center for Internet Security (CIS), a globally recognized independent, not-for-profit organization on best-practices in cybersecurity, as well as Mr. Ban's Special Adviser for Relocation of Camp Hurriya Residents Outside of Iraq, served from 2003 to 2007 as UN Assistant Secretary-General for Peacekeeping responsible for comprehensive on-the-ground support to all UN peace operations worldwide.

From 2007 to 2008 she supported the Secretary-General's establishment of the Department of Field Support serving as acting UN Under-Secretary-General. From 2008 to 2009, she served as UN Assistant Secretary-General for Peacebuilding, responsible for coordinating efforts to build sustainable peace in countries emerging from violent conflict.

Before joining the UN, Ms. Holl Lute was Executive Vice-President and Chief Operating Officer of the UN Foundation and the Better World Fund.

In Op-Ed, UN envoy details Organization's measures to root out sexual exploitation in its peace missions 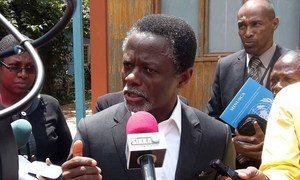 The United Nations Mission in the Central African Republic (MINUSCA) reported today that it has identified seven new possible victims of sexual exploitation and abuse in the town of Bambari, just days after the UN revealed which countries' troops have been accused of abusing minors.