8 February 2016
Thousands of detainees have been killed while in the custody of the warring parties in Syria over the past four and a half years, with thousands held by the Government beaten to death or dying from torture and anti-Government groups brutalizing and executing prisoners in war crimes and crimes against humanity, a United Nations commission reported today.

“Nearly every surviving detainee has emerged from custody having suffered unimaginable abuses,” Paulo Pinheiro, Chair of the Independent International Commission of Inquiry on Syria, said of those held by the Government in releasing the report in Geneva – Out of sight, out of mind: Deaths in detention in the Syrian Arab Republic.

“For ordinary Syrians, the spectre of arrest or abduction and the near-inevitable horrors that follow have paralyzed communities across the country,” he said.

The report, which calls on the Security Council to adopt targeted sanctions against persons, agencies and groups suspected of responsibility or complicity in deaths, torture and enforced disappearance, is based on 621 interviews and extensive documentary material on killings by all parties between 10 March 2011 and 30 November 2015.

It details how civilians have been arbitrarily arrested, unlawfully detained, taken hostage, or kidnapped, with eyewitness accounts and documentary evidence strongly suggesting that tens of thousands of people are detained by the Government at any one time. Thousands more have disappeared after initial arrest by State forces or while moving through Government-held territory.

It describes, sometimes in gruesome depictions, how thousands of detainees held by the Government have been beaten to death or died as a result of injuries sustained due to torture. Many others perished as a consequence of inhuman living conditions and deprivation of medical care.

These killings and deaths, the report stresses, occurred with high frequency over a protracted period of time and in multiple locations controlled by the Syrian State apparatus, with significant logistical support involving vast State resources.

Government officials intentionally maintained such poor conditions of detention for prisoners as to have been life-threatening, and were aware that mass deaths of detainees would result. These actions, in the pursuance of a State policy, amount to extermination as a crime against humanity, the report adds.

The Commission determines that the Syrian Government has also committed the crimes against humanity of murder, rape or other forms of sexual violence, torture, imprisonment, enforced disappearance and other inhuman acts. These violations constitute war crimes, where the acts were committed after the start of the armed conflict.

“We have heard shocking evidence of how people have been summarily executed following illicit trials, while some individuals taken hostage died in the custody of armed groups”, said Commissioner Vitit Muntarbhorn.

In areas under control of the Islamic State of Iraq and the Levant (ISIL) the terrorist group subjected detainees to serious abuses, including torture and summary executions. Detainees were frequently executed after unauthorized courts issued death sentences. ISIL has committed the crimes against humanity of murder and torture, and war crimes.

Through the report, the Commission hopes that efforts will be strengthened to find a path to justice for Syrian civilians, as well to assist prosecutorial and judicial authorities seeking to bring cases, whether at a national or international level.

“Accountability for these and other crimes must form part of any political solution,” said Commissioner Carla del Ponte. “Instead, these violations are being committed with total impunity.”

The Commission was established by the Geneva-based UN Human Rights Council in 2011 to investigate and record all violations of international human rights law and allegations of crimes against humanity and war crimes in Syria, and to identify, where possible, those responsible with a view to ensuring that perpetrators are held accountable. 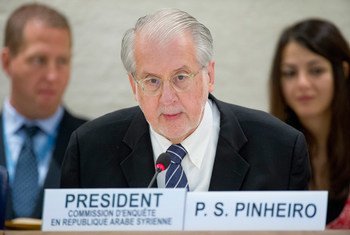 21 September 2015
It is time to overcome diplomatic failure and recognise that there is a global interest in returning Syria to peace, the head of a United Nations-mandated human rights inquiry said today, warning that if conflict continues, nations will be “fuelling a war to keep their influence over a country that will barely exist.”