Working with the Syrian Arab Red Crescent (SARC), the United Nations refugee agency has delivered crucial humanitarian aid to a rural town near Damascus that has been cut off by fighting for three years, stranding thousands of residents in dire conditions without clean water or fuel for warmth.

"People were asking for extra plastic sheeting and blankets as they don't have any other means for heating their homes, many homes have been destroyed, with many families sharing residences with relatives and neighbours,” said a volunteer involved in the delivery to Al-Mleiha, which lies on the edge of the eastern Ghouta region at a strategic road leading to Damascus airport.

The SARC convoy delivered non-food aid on Sunday to more than 1,300 people living in the buffer zone around Al-Mleiha, where families living in shattered homes are burning plastic to keep warm.

Around 50,000 people lived in Al-Mleiha before the present crisis, although many have since sought safety in neighbouring towns and villages. There are currently only around 26,000 people living in the town, according to UN reports, 10,000 of them internally displaced.

"These items are of crucial support to the residents of Al-Mleiha as it helps them reinforce their shelters and provide them with warmth in this cold season," Office of the UN High Commissioner for Refugees (UNHCR) Senior Field Officer Pablo Vizcaino said of the aid, which included hygiene kits, plastic sheeting, sleeping mats, kitchen sets, and blankets, along with food parcels provided by the International Committee of the Red Cross.

As the crisis in Syria nears its sixth year, up to 4.5 million people still live in hard-to-reach areas, including some 400,000 in 15 besieged locations, without access to the aid they desperately need.

Access to Al-Mleiha "boosts hopes for upcoming regular deliveries of humanitarian assistance to vulnerable people in Al-Mleiha and other besieged and hard to reach locations," UNHCR Representative in Syria Sajjad Malik said.

The deliveries to local residents in the town will be continued periodically according to SARC.

Last month, UNHCR and its partners finally managed to reach the besieged town of Madaya with life-saving health and food supplies 42,000 desperate residents after reports of people starving to death under encirclement by pro-Government forces.

At the same aid was also delivered to Kafraya and Foah, two towns under siege by opposition forces near the Turkish border in northwest Syria, where 20,000 people were also in desperate need, cut off from humanitarian and commercial access since October. 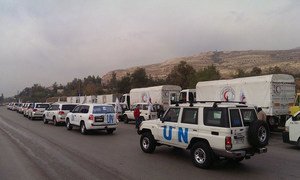 A humanitarian convoy has finally reached the besieged Syrian town of Madaya with life-saving health and food supplies from the United Nations and its partners for the 42,000 desperate residents after reports of people starving to death under encirclement by pro-Government forces.