OCHA Syria
A humanitarian convoy on its way to the besieged Syrian town of Madaya.

11 January 2016
A humanitarian convoy has finally reached the besieged Syrian town of Madaya with life-saving health and food supplies from the United Nations and its partners for the 42,000 desperate residents after reports of people starving to death under encirclement by pro-Government forces.

"Crowds of hungry kids around," Office of the UN High Commissioner for Refugees (UNHCR) representative Sajjad Malik said via text message this evening from the isolated town as the first four trucks of the 49-truck convoy unloaded in the dark to help relieve a situation that UN officials last week called “horrendous…ghastly,” noting that deliberate starvation of civilians amounts to war crimes.

"It's heartbreaking to see so many hungry people. It's cold and raining but there is excitement because we are here with some food and blankets," he added of the town, where the UN has received credible reports of people dying from starvation and being killed or injured while trying to leave the area, which last received UN humanitarian aid in October.

UN Humanitarian Coordinator in Syria Yacoub El Hillo said today it has taken long and patient negotiations with many parties to facilitate the convoy.

At the same time trucks have left Damascus for Kafraya and Foah, two towns under siege by opposition forces near the Turkish border in northwest Syria, where 20,000 people are also in desperate need, cut off from humanitarian and commercial access since October, as the war between the Government and a whole spectrum of rebel forces nears the start of its sixth year.

The inter-agency convoy to Madaya brought life-saving items, including health, nutrition and food supplies, blankets, shelter materials, and soap for the people. The non-government group Médecins Sans Frontières (MSF) has said 23 people starved to death in the town in December, six of them children.

Partner agencies are providing food and medicine through the convoys organized by the UN, the International Committee of the Red Cross (ICRC) and the Syrian Arab Red Crescent.

Mr. Hillo noted that while there is much focus on Madaya, where the situation requires an immediate response, the UN and its humanitarian partners are equally concerned about the 4.5 million people living in besieged and hard-to-reach area across Syria, including nearly 400,000 in 15 besieged locations without access to the aid that they desperately need.

In the past year, only 10 per cent of all requests to access these areas were approved and delivered.

“We continue to call on all parties to the conflict to facilitate sustained and unimpeded access to all people in besieged and hard-to-reach areas in Syria,” Mr. Hillo stressed.

On the political front, UN Special Envoy for Syria Staffan de Mistura, who is preparing the ground for political talks beginning in Geneva on 25 January in an effort to end the fighting, concluded a new round of regional consultations on Sunday, meeting in Tehran with Iranian Foreign Minister Mohammad Javad Zarif and his deputy.

He updated them on preparations for the talks, and as did when he visited Saudi Arabia last week, obtained assurances that current tensions between Iran and Saudi Arabia would not affect the engagement of their government in supporting the Geneva talks.

On Saturday, Mr. de Mistura also had what was described as a useful meeting in Damascus with Syrian Foreign Minister Walid Mouallem, and will now report back to Secretary-General Ban Ki-moon and seek his guidance ahead of the Geneva talks. 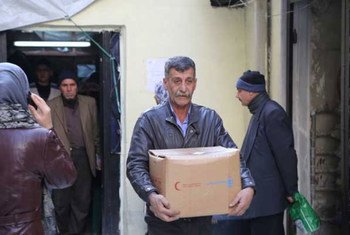 8 January 2016
As the United Nations and its partners struggled today to gain humanitarian access to the Government-beseiged Syrian city of Madaya, amid reports of people starving to death or being killed while trying to leave, UN officials called the situation “horrendous…ghastly,” and a potential war crime.