<a href=http://bit.ly/1Sbe0Ei>UNEP GRID Arendal/Yannick Beaudoin</a>
The takin, also called cattle chamois or gnu goat, is a goat-antelope found in the eastern Himalayas and is the national animal of Bhutan.
27 January 2016

The genetic diversity of livestock can play a vital role in feeding the world in the face of hotter weather and the other effects of climate change, yet many valuable breeds continue to be at risk, the United Nations agricultural agency warned today, calling for stronger global efforts to safeguard the existing gene pool.

Indiscriminate cross-breeding is the main cause of genetic erosion, according to the FAO’s Second Report on the State of the World’s Animal Genetic Resources for Food and Agriculture, which also cited the increasing use of non-native breeds, weak regulation, the decline of traditional production and neglect of breeds considered not competitive enough.

Beyond climate change, future challenges include emerging diseases, pressure on land and water, and shifting market demands, which make it more important than ever to ensure animal genetic resources are conserved and used sustainably.

Cross-breeding, embraced by developing countries which import genetic material to enhance milk productivity and speed up an animal’s path to maturity, can lead to loss of valuable characteristics such as the ability to cope with extremes of temperature, limited water supplies, poor-quality feed, rough terrain, high altitudes and other challenging environmental conditions.

As an example, the report cited Brazil’s Pantaneiro cattle who have lived in the Pantanal region since being introduced by the Portuguese 400 years ago. They are believed to be resistant to various parasite-induced diseases, worms and ticks and are able to survive both floods and droughts and thrive on the course native pastures.

At the beginning of the 20th century there were several thousand, but there are now only 500 pure-bred animals, threatening to erode the breed’s capacity to adapt and survive. Commercial breeds have lost some gene variants associated with fitness and survival in harsh environments, and intermixing with commercial breeds is the main threat to the Pantneiro’s survival.

According to the report, 1,458 of the world’s farm animal breeds, about 17 per cent of the total, are currently at risk of extinction, while the risk status of 58 per cent is simply unknown due to lack of data on the size and structure of their populations.

Nearly 100 livestock breeds worldwide have gone extinct between 2000 and 2014, with Europe/Caucasus and North America the two areas with the highest proportion of at-risk breeds. Both areas are characterized by highly specialized livestock industries that tend to use only a small number of breeds for production.

A total of 129 countries participated in the new global assessment, which comes nearly a decade after the First Report in 2007 and suggests there has been some improvement since then as Governments overall have stepped up efforts to halt genetic erosion manage their breeds more sustainably.

In 2007, fewer than 10 countries reported having established a gene bank. That number has now risen to 64 and an additional 41 are planning to establish such banks. 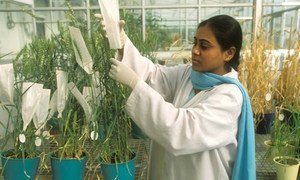