Geoffrey M. Attardo, Research Scientist, Yale School of Public Health
A bite from a parasite-carrying tsetse fly can cause trypanosomiasis in animals and sleeping sickness in humans.

24 April 2014
Scientists in a United Nations-backed collaborative have cracked the genetic code of the bloodsucking tsetse fly in a breakthrough that brings new hope to the fight against one of the most devastating livestock diseases spread by the insect.

Tsetse flies are vectors for the single-cell parasites that cause trypanosomiasis, or nagana, an often-lethal disease that affects some 3 million animals in sub-Saharan Africa each year at massive costs to farmers’ livelihoods and food security.

The tsetse genome was sequenced and annotated during a 10-year global collaborative effort that involved the Insect Pest Control Laboratory run jointly by the Rome-based UN Food and Agriculture Organization (FAO) and the International Atomic Energy Agency (IAEA) in Vienna.

Scientists will now be able to better study the fly’s genes and functions, knowledge that should open the door for researching ways to control the insect, according to a news release issued by the two UN agencies.

“Decoding the tsetse fly’s DNA is a major scientific breakthrough that opens the way for more effective control of trypanosomiasis, which is good news for millions of herders and farmers in sub-Saharan Africa,” said Kostas Bourtzis of the Joint FAO/IAEA Division of Nuclear Techniques in Food and Agriculture.

“Detection and treatment of trypanosomiasis is currently expensive, difficult and dangerous for the livestock as it often involves toxic drugs, but this new knowledge will accelerate research on tsetse control methods and help scientists develop new and complementary strategies to reduce the use of costly drugs and insecticides,” he said.

Trypanosomiasis leads to a debilitating chronic condition that reduces fertility, weight gain, meat and milk production, and makes livestock too weak to be used for ploughing or transport, which in turn affects crop production.

Humans bitten by carrier flies can develop African sleeping sickness, which can be fatal without treatment.

No vaccine against the disease exists for livestock or humans because the parasite is able to evade mammalian immune systems, so control methods primarily involve targeting tsetse flies through trapping, pesticide treatments and sterile male release strategies.

The Joint FAO/IAEA Division is currently supporting 14 African nations in their efforts to tackle the trypanosomiasis problem by controlling tsetse fly populations by integrating the sterile insect technique with other control methods.

A form of “insect birth control,” according to the Division, the sterile insect technique involves releasing mass-bred male flies that have been sterilized by low doses of radiation into infested areas, where they mate with wild females. These do not produce offspring and, as a result, the technique can suppress and, if applied systematically on an area-wide basis, eventually eradicate populations of wild flies.

Tsetse flies were successfully eradicated from the island of Zanzibar using the sterile insect technique and are currently being suppressed in parts of southern Ethiopia. In January, Senegal reported that it was making significant progress in infested areas in the Niayes with the same method. 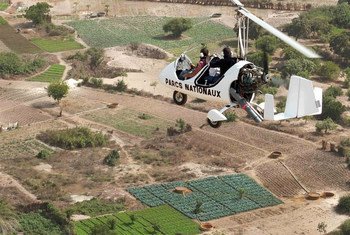 10 January 2014
A United Nations-led campaign against the tsetse fly, which transmits a disease that devastates livestock, in the Niayes area near Senegal’s capital, Dakar, has made giant strides towards eradicating the pest’s population.