UNICEF/Pierre Terdjman
A child holds a package of ready-to-use therapeutic food at a malnutrition centre in Bangui Paediatric Hospital in the Central African Republic.
25 January 2016

The Office of the United Nations High Commissioner for Refugees (UNHCR) and its partners today called on donor nations for more than half-a-billion dollars this year to help hundreds of thousands of people forced to flee conflicts in Nigeria and the Central African Republic (CAR), and for the host communities providing them with shelter and other basic services.

“These two humanitarian crises must not be forgotten; they are not going away,” said Liz Ahua, UNHCR’s Regional Refugee Coordinator for the CAR and Nigeria situations, in a press release.

“The suffering is great and the needs acute among both the displaced and host communities. Violence occurs on almost a daily basis in north-east Nigeria and CAR, generating fear and new displacement in the region,” she added, citing suicide attacks, kidnapping, indiscriminate killings and massive human rights abuses.

The two Regional Refugee Response Plans (RRRP), presented at a donor briefing in Yaoundé, Cameroon, include $198.76 million for 230,000 Nigerian refugees and some 284,300 members of host communities in Niger, Chad and Cameroon as well as $345.7 million for 476,300 CAR refugees and some 289,000 people hosting them in Chad, Cameroon, the Democratic Republic of the Congo (DRC) and the Republic of Congo.

According to UNHCR, both response plans cover needs in sectors such as protection, education, food security, health and nutrition, livelihoods, shelter, basic aid and water, hygiene and sanitation. The CAR appeal is being made by 25 organizations, and the Nigeria one by 28. UNHCR alone is seeking $189.54 million under the Central African Republic RRRP and $62.33 million for the other.

“There is light at the end of the tunnel, but we won’t see it unless there is a much stronger commitment from African governments and the international community to help re-establish stability and peace,” Ms. Ahua said, urging donors to give more generously.

In 2015, the Nigerian RRRP received 52 per cent of its financial requirements while the Central African Republic RRRP received just 27 per cent.

Meanwhile, despite important steps towards restoring peace in both north-east Nigeria and CAR, the UN is underlining that there were also reverses and continuing significant population displacement in 2015. In Nigeria, the Government rolled back Boko Haram gains, but the insurgent group turned to terror tactics that spread into neighbouring countries.

In CAR, relative peace was punctuated by waves of violence that triggered flight within the country and into the DRC, but the first round of the presidential election passed peacefully in late December with the participation of tens of thousands of refugees in Chad, the Republic of Congo and Cameroon. The second round is due in February.

“We need funding to prevent malnutrition among children; to run schools, build up proper sanitation systems and provide clean water; and to make sure that families have shelter over their heads,” stressed Ms. Ahua.

The Nigeria and CAR regional response plans are part of the wider 2016 humanitarian appeal, asking for $20.1 billion to reach 87 million people around the world, launched last December.

♦ Receive daily updates directly in your inbox - Subscribe here to a topic.
♦ Download the UN News app for your iOS or Android devices.
CAR|nigeria 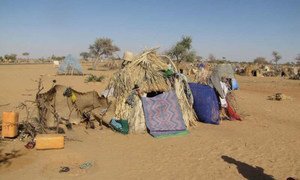 Citing a “very serious situation with acute shortages of shelter” in south-east Niger where some 100,000 people have fled to escape Boko Haram violence, the United Nations refugee agency today appealed for urgent humanitarian assistance and funding to help those that have been uprooted.