The United Nations in Libya has expressed regret over the decision of the country’s Presidency Council to postpone the formation of a national unity government for 48 hours beyond the deadline set by a UN-facilitated political agreement, emphasizing that all efforts to combat and eliminate these terrorist groups must be led by the Libyan State.

“Libya is a critical juncture. Determination to start a new chapter must be accompanied by immediate steps to end political divisiveness and address the numerous security, humanitarian and economic challenges,” the UN Support Mission (UNSMIL) said in a statement issued late Sunday.

“The formation of a Government of National Accord (GNA) enjoying the support of the Libyans is but the first step,” added the Mission.

The UN mission called on all relevant political and security stakeholders to hold Libya’s national interests above all else. “No effort must be spared nor any opportunity missed to utilize the window of opportunity that Libya has to halt any further expansion by terrorist groups represented in Da’esh, Ansar Al-Sharia and Al-Qaida,” the statement read.

The boldness with which terrorist groups, such as the Islamic State of Iraq and the Levant (ISIL), had launched their latest string of attacks on key oil installations in Sidra, Ras Lanuf and Benghazi was a potent reminder of the need to forge a united front to contain and eliminate the growing danger, said UNSMIL.

“The GNA must lead the collective efforts of the army and its leaderships alongside other security institutions and their leaderships, in the fight against terrorism. Likewise, it is vital that the GNA also avail itself of armed formations currently engaged in the fight against Da’esh and other terrorist groups,” the statement continued.

UNSMIL underscored that to defeat the terrorist groups, the GNA must prioritize training, arming and equipping the army and police institutions.

“Only a collective effort by all patriotic Libyans will save Libya from the scourge of terrorism,” exhorted the UN mission. “Leadership, courage and determination are now needed to send a strong and clear message to the Libyan people that Libya has taken its first step towards peace, security and prosperity.”

In cooperation with the international community, UNSMIL stands committed to working closely with the GNA to ensure that the necessary support and assistance is provided to the legitimate Libyan authorities, including through a review of the current arms embargo on Libya.

The UN mission urged the Presidency Council to adhere to the new target date it had set itself and emphasised the need for all concerned parties to respect LPA timelines. 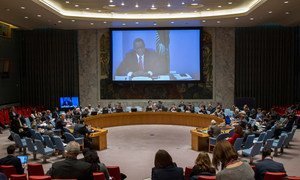 Strongly condemning yesterday’s terrorist attack on a security training centre in Zliten, Libya, and in the wake of that deadly incident and the recent attacks on the country’s oil infrastructure, the United Nations Security Council has urged all Libyan parties to joint together to combat terrorist threats by implementing the recent agreement on a unity government.