<a href=http://bit.ly/1LvXDgK>Amy Stillman/IRIN</a>
At the Casa del Migrante de Saltillo, a migrant shelter in the northern Mexican state of Coahuila, a day’s journey to the Texas border, migrants are given food, medical care and legal aid.
14 January 2016

The United Nations refugee agency today called for urgent regional coordination to help people fleeing deadly violence in El Salvador, Guatemala and Honduras in the light of plans by the United States to expand its resettlement programme to benefit them.

“The US initiative to resettle Central American refugees is a welcome step to help address the growing refugee crisis,” said the Office of the UN High Commissioner for Refugees (UNHCR) Regional Representative in the United States, Shelly Pitterman.

Reiterating its serious concern for the welfare of large numbers of people who continue to flee from the three countries, UNHCR said it is working closely with regional Governments and civil society partners to enhance screening capacity to identify people forced to flee the violence.

It is also encouraging Governments to introduce legal avenues for refugees to find safety to protect them from exploitation by smugglers and traffickers, supporting clear and accessible procedures for asylum-seekers and other steps needed for an effective regional response.

While it is the prerogative of States to manage the security of their borders, the return of persons deemed not to be in need of international protection should take place only after their claims have been considered through due process, the agency stressed.

Moreover, any such returns must be carried out in a manner that is orderly, safe and respectful of the dignity of the individuals and families concerned. In particular, returns of unaccompanied or separated children must be based on a determination of what is in the best interests of the child.

♦ Receive daily updates directly in your inbox - Subscribe here to a topic.
♦ Download the UN News app for your iOS or Android devices.
Central America 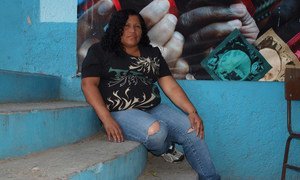 Women in Central America and Mexico are fleeing their countries in rising numbers to escape a surge in deadly, unchecked gang violence, fuelling a looming refugee crisis in the Americas that demands urgent and concerted action by the States of the region, the United Nations refugee agency is warning.