Starvation ‘as a weapon’ is a war crime, UN chief warns parties to conflict in Syria

UNICEF/UN07229/Al Saleh, WFP
On 11 January 2016 in Madaya, Rural Damascus, women and their families wait for permissions to leave the besieged town.
14 January 2016

With United Nations humanitarian teams witnessing scenes in Syria that “haunt the soul,” Secretary-General Ban Ki-moon today said the situation is “utterly unconscionable,” and warned that the use of starvation as a weapon during conflict is a war crime.

“Perhaps nothing more urgently reflects the need to act than the harrowing scenes from Madaya,” Mr. Ban told reporters at a press conference in New York following remarks to the UN General Assembly highlighting his 2016 priorities.

For months, the Syrian town has been besieged by parties to the conflict – a war soon entering its sixth year. UN relief teams and their partners have only recently been granted access by the Government to deliver much needed food and medical aid to thousands of people trapped inside besieged towns like Madaya.

“Shocking depths of inhumanity” were the words used by the UN chief today to describe the situation there. Relief staff who have entered Madaya reported seeing “the elderly and children, men and women, who were little more than skin and bones: gaunt, severely malnourished, so weak they could barely walk, and utterly desperate for the slightest morsel.”

The Secretary-General said there can be no denying their suffering: “Many hundreds of people are in such a dire state that they require immediate medical attention, including through possible evacuation,” he stressed.

“We are working to get medical teams and mobile clinics on the ground right away. I want to make a special plea for those in besieged areas of Syria. I would say they are being held hostage – but it is even worse. Hostages get fed.”

He noted that it has never been easy for the United Nations and its partners to reach those in such desperate need, but the situation is getting worse.

In 2014, the UN and partners were reportedly able to deliver food to about five per cent of people in besieged areas, while today, estimates show the Organization is reaching less than one per cent.

“This is utterly unconscionable,” Mr. Ban stated. “Let me be clear: the use of starvation as a weapon of war is a war crime.”

He said all sides – including the Syrian Government – are committing this and other “atrocious acts” prohibited under international humanitarian law.

“States, in the region and beyond, that can make a difference must press the parties for sustained and unimpeded humanitarian access throughout Syria,” he urged, noting this means members of the International Syria Support Group specifically, which is comprised of the League of Arab States, the European Union, the UN, and 17 countries.

Furthermore, he said other urgent measures are needed – such as the immediate end to the use of indiscriminate weapons in civilian areas, including through shelling and air strikes by any of the parties involved militarily in Syria.

“No cause can justify the toll in civilian lives and destroyed schools, clinics and markets that we continue to register around the country every day,” he insisted.

Finally, he recalled that his Special Envoy, Staffan de Mistura, will continue to work towards convening intra-Syrian Geneva Talks on 25 January. 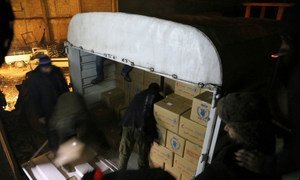 As United Nations officials gave on-site accounts of the “horrible and terrible” situation in the besieged Syrian town of Madaya, from 400 critically ill people facing death without immediate medical care to a kilo of rice costing $300, the first emergency evacuation took place today – a five-year-old girl rushed through pro-Government roadblocks for urgent surgery in Damascus.