UNICEF/Mohamed Hamoud
A boy holds a large piece of exploded artillery shell, which landed in the village of Al Mahjar, a suburb of Sana’a, the capital of Yemen.
12 January 2016

The ongoing deadly violence in Yemen has left nearly 10 million children facing threats of malnutrition and disease, lack of education, the United Nations Children’s Fund (UNICEF) representative to the country warned today, calling for unhindered humanitarian access to all those in need and an end to the conflict.

“Continuous bombardment and street fighting are exposing children and their families to a deadly combination of violence, disease and deprivation,” UNICEF Representative Julien Harneis said, sounding the alarm on behalf of the conflict’s most vulnerable.

According to the UN, more than 700 children have been killed, with more than 1,000 injured since last March. Additionally, about 700 had been forced to become child soldiers.

Children, who make up about half of the 2.3 million people in Yemen displaced from their homes, are also struggling to get water on a daily basis, and facing the risk of acute malnutrition and respiratory tract infections. They are also without access to education.

“The longer-term consequences of all this for Yemen – which was already the Middle East’s poorest nation even before the conflict – can only be guessed at,” said Mr. Harneis, adding that “public services like health, water and sanitation have been decimated and cannot meet the ever-increasing needs of a desperate population.”

In response, UNICEF and partners are doing the best they can in an extremely hazardous working environment: they have provided vaccinations against measles and polio to children under the age of five, as well as treatment for malnutrition.

Moreover, over 3.5 million affected people were provided water and sanitation, with vulnerable communities receiving humanitarian cash transfers in the cities of Sana’a and Taiz.

“But so much more is needed. The children of Yemen need urgent help and they need it now,” Mr. Harneis stressed, calling for unhindered access to areas where civilians are dying without functioning hospitals, where medicines are in short supply and children are at risk of dying from preventable diseases.

Ongoing conflict in Yemen wreaked havoc on the country, inflicting damage on civilian infrastructure, straining depleted resources and exacerbating an already precarious humanitarian situation. Despite some progress in identifying a framework for negotiations and defining a set of confidence-building measures, UN-facilitated peace talks in December 2015 had to be adjourned until a ceasefire could take hold.

Regarding current status of the talks, Ahmad Fawzi, interim Director of the UN Information Service in Geneva, told the regular bi-weekly press briefing today that the UN Special Envoy for Yemen, Ismail Ould Cheikh Ahmed, was still in the region. Following intensive talks in Riyadh, Saudi Arabia, the Envoy was to visit Sana’a in Yemen.

Responding to a question about the resumption of talks, Mr. Fawzi said 14 January had been mentioned as a preliminary date, but the Special Envoy’s preference was now to hold the next round of talks in the region, and he was working with the parties to agree a location that was acceptable to all, with a provisional start date after 20 January.

Switzerland remained an option for the Special Envoy, and the Swiss authorities were supportive in every way and happy to host such a meeting. The host Government continued to offer to facilitate such political processes in an efficient and generous manner, added Mr. Fawzi. 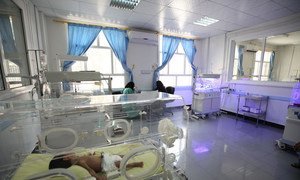 United Nations Secretary-General Ban Ki-moon has condemned yesterday’s attack on a hospital supported by Médecins Sans Frontières (MSF) in Sa’ada province, Yemen, which killed at least four people and injured many others.