UNHCR/Achilleas Zavallis
A refugee from Syria hugs her crying daughter moments after reaching the Greek Island of Lesbos from Turkey in an inflatable boat.
30 December 2015

Refugees and migrants fleeing to Europe by sea this year have passed one million, according to figures just released by the UN refugee agency, many on perilous trips aboard inadequate vessels run by people smugglers, with at least 3,735 more believed drowned.

As of last night, the Office of the UN High Commissioner for Refugees (UNHCR) said 1,000,573 people had reached Europe across the Mediterranean, mainly to Greece and Italy, in 2015, half a million of them Syrians escaping war in their country, with Afghans accounting for 20 per cent and Iraqis for seven per cent.

The overall figure already topped one million last week, but that included 34,000 people reported by the International Organization for Migration (IOM) to have crossed from Turkey into Bulgaria and Greece by land.

“Why is it that a million people have to enter Europe by smugglers boat?” UNHCR spokesperson Adrian Edwards said. “The scale of these sea crossings, the fact that people continue to arrive daily in their thousands on the Aegean islands, and that nearly 4,000 lives have been lost in 2015, all beg that question.

“There are abundant regular, safe and legal means of managing this and they need serious looking at,” he added, stressing that UNHCR has urged both people and Governments to intensify efforts to facilitate legal entry routes to Europe.

“As anti-foreigner sentiments escalate in some quarters, it is important to recognize the positive contributions that refugees and migrants make to the societies in which they live and also honour core European values: protecting lives, upholding human rights and promoting tolerance and diversity,” he said.

The number of people displaced by war and conflict is the highest seen in Western and Central Europe since the 1990s, when several conflicts broke out in the former Yugoslavia.

Those crossing the Mediterranean increased steadily from some 5,500 in January to a monthly peak in October of over 221,000.

After an initial chaotic reaction which resulted in tens of thousands of people moving from Greece through the Western Balkans and northwards, then finding themselves blocked at various borders, a more coordinated European response is beginning to take shape, according to the UN refugee agency.

UNHCR has launched an emergency response to support and complement European efforts. More than 600 emergency staff and resources have been deployed to 20 different locations, providing life-saving aid and protection, advocating for human rights and access to asylum, particularly for refugees with specific needs, such as unaccompanied children and women-headed households.

UNHCR stresses that much more needs to be done, however, to reinforce reception capacity at entry points, to allow for humane and effective accommodation, aid, registration and screening of people arriving every day, and to identify those in need of protection, those to be relocated to other countries within the European Union, and those who do not qualify for refugee protection and for whom effective and dignified return mechanisms have to be put in place. 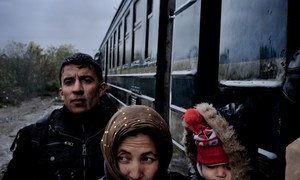 The number of refugees and migrants fleeing to Europe in 2015 has topped an unprecedented one million – at least 3,600 died or went missing in the crossings – the UN refugee agency (UNHCR) reported today, calling for much more to be done to receive and aid those uprooted by persecution, conflict and poverty.