The new United Nations envoy for Libya announced today that the parties to the country’s political dialogue process have agreed to set 16 December as the target date to sign the UN-facilitated agreement on forming a national unity government, aiming to bring an end to a crisis that has left nearly 2.4 million Libyans in desperate need of humanitarian assistance.

Briefing the Security Council via videoconference just after two-day deliberations on the issue wrapped up in Tunis, Special Representative of the Secretary-General and head of the UN Support Mission in Libya (UNSMIL) Martin Kobler said the talks in the Tunisian capital had culminated in agreement on a number of key points.

Additionally, Mr. Kobler said the participants of the political dialogue, numbering up to 40 men and women, decided to publicly announce 16 December as a target date for their signature and lastly, they had unanimously called on all political and security actors to create a conducive environment to enable a future Government of National Accord to assume its responsibilities in the Libyan capital, Tripoli, without threat or intimidation.

“Critically, participants in the political dialogue highlighted the urgency, the time factor. Libya is in a race against time, it’s very social fabric, national unity and territorial integrity are directly endangered by the forces of extremism and terrorism, the likes of Da’esh [also known as Islamic State of Iraq and the Levant, or ISIL], which are actively consolidating and seeking to extend their influence beyond areas under their immediate control,” said Mr. Kobler, adding that many participants referred to the imminent danger of Da’esh expansion.

At the same time, he warned that the two institutions at the centre of the political conflict in Libya are beginning to show dangerous signs of internal fragmentation.

“The military conflict, particularly in Benghazi, continues to exact a heavy toll on the civilian population, adding to the existing humanitarian situation,” Mr. Kobler continued, noting that much of Benghazi – “the cradle of 17 February revolution” – is now a wasteland.

Further, he reported that nearly 2.4 million people require immediate humanitarian assistance, of which 435,000 are estimated to be internally displaced, in addition to several hundred thousand refugees and migrants.

Mr. Kobler said that Libya’s neighbours and others in the region and beyond have expressed a growing sense of alarm at the prospect of a spill over of the terrorist threat.

In southern Libya, he said, criminality and lawlessness have reached “endemic” levels as extremist and terrorist groups continue to expand their spheres.

“But in the face of all this, Libyans are overwhelmingly united on one key point. Libya can no longer wait for peace to come; the time has come to make peace,” stressed Mr. Kobler.

Mr. Kobler stressed that the meeting in Tunis revealed that the Libyans expect support from the Security Council and from the wider international community, and he emphasized that this support is indispensable to help them to forge “peace through unity.”

The UN envoy also said that the forthcoming High-Level Ministerial Conference in Rome hosted by Italy and the United States will provide an opportunity for the international community to speak with a strong and united voice in support of the Libyan Political Agreement.

In the context of the Rome Conference, Mr. Kobler highlighted a few key points, on behalf of the Libyan dialogue participants. Firstly, he said the Security Council must unequivocally support the outcomes of the Libyan political dialogue and the Political Agreement as this would “send a clear message to those whose narrow agendas continue to stand in the way of peace.”

He added that efforts must be made to ensure that technical support to the future Libyan Government of National Accord is “visible, tangible and sustainable” for quick delivery.

Further, Mr. Kobler said that concerted efforts will need to be exerted to address the humanitarian situation and the “terrible plight” endured by the civilian population and also mobilizing international support to assist Libyan authorities to take decisive measure to combat, contain and eliminate the threat of Da’esh.

Citing the Agreement as a “unique opportunity”, Mr. Kobler said that it is unlikely that there will be other opportunities without inflicting further suffering and hardship on the Libyan people.

“Once the Agreement is signed, we will immediately assist in broadening the basis of support for the new Government which should ultimately based in Tripoli. Through engagement with the militias, political parties, tribal elders, and civil society, we will advocate for acceptance of the Libyan Political Agreement,” said Mr. Kobler.

Lastly, he appealed to the sense of patriotism and statesmanship of Libya’s leaders to give consideration to the country’s higher national interests and the long-term welfare of its people. Their support to the Agreement “will be the first step on Libya’s road to peace, security and prosperity.” 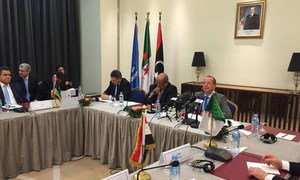 The top United Nations official in Libya has emphasized that the political agreement reached after wide consultations among Libyan parties and facilitated by the UN for more than a year, is the basis to end the North African country’s conflict.