Women in US lagging behind in human rights, UN experts report after ‘myth-shattering’ visit

While praising the current United States administration for its commitment to women’s equality, United Nations experts warned today that the extreme polarization of US politics is “profoundly” affecting the Government’s ability to guarantee women’s human rights, and even to ratify the International Convention on the Elimination of All Forms of Discrimination against Women.

“The US, which is a leading State in formulating international human rights standards, is allowing its women to lag behind,” said the UN Working Group on discrimination against women in law and practice in a news release issued by the Office of the UN High Commissioner for Human Rights (OHCHR).

As regards the women’s anti-discrimination convention, the experts noted that the US is one of only seven countries which have not ratified the treaty, widely known as CEDAW. “We are of the unreserved opinion that ratification of CEDAW is crucial, on both the domestic and the global levels, in order to confirm the US commitment to substantive equality for women in all spheres of life,” they underscored.

The experts said their 10-day official visit to the US, which ran from 30 November-11 December, was particularly timely since the political rhetoric of some of the candidates for the upcoming Presidential elections has included “unprecedented hostile stereotyping of women” along with “increasingly restrictive legislative measures by many of the states to prevent women’s access to exercise of their reproductive rights.”

They also noted that a wide diversity in state law and practice in the US makes it impossible to give a comprehensive report, but what they found nevertheless pointed to an “overall picture of women’s missing rights.”

“We understand the complexity of federalism, but this cannot be regarded as a justification for failure to secure these rights, which are universal, indivisible and inalienable,” the experts underscored.

They also stressed that while all women are the victims of these missing rights, those who are poor, belong to Native American, Afro-American and Hispanic ethnic minorities, migrant women, LBTQ women, women with disabilities and older women are disparately vulnerable.

They noted that the women in the US do not take their “rightful place as citizens of the world’s leading economy,” as they face barriers in campaigning for political office and are 72 in global ranking for representation in the legislature.

Further, the experts also observed the nationwide absence of the right to paid maternity leave, and cautioned that US women face ever increasing obstacles to accessing reproductive health services, both as a result of legislative restrictions in many states and because of violent attacks on reproductive health clinic staff and patients.

They also found that between 1990 and 2013 maternal mortality increased by 136 per cent, with Afro-American women at four times the risk.

“We witnessed the intimidation and harassment in our visits to clinics,” they added. Indeed, just before their arrival in the US, people were killed at the Planned Parenthood Family Planning Center in Colorado.

The UN human rights experts noted that, despite the efforts of the current administration to take measures to eliminate violence against women, such violence is persistent and is exacerbated by the lack of gun control.

“We were appalled by the over-incarceration of women, mostly for non-violent crimes, and the failure to find non-custodial solutions for mothers of dependent children,” they said, expressing deep concern at the women prisoners’ conditions, which include mass accommodation spaces, over-crowding in cells, solitary confinement, shackling during childbirth and lack of support for re-entry.

Highlighting the “deeply disturbing” condition of migrant women in detention centres, in particular women with minor children who are in prolonged detention, the experts said that proper health care services are not systematically provided in a timely manner to these women, despite the horrifying physical and emotional ordeals endured by many of them in their transit to the US.

“We also received allegations of women being subjected to an ‘expedited removal process’ resulting in the denial of many legitimate asylum claims,” they added.

They also held meetings with representatives of civil society organizations, as well as academics, practitioners and individual women in Washington D.C., Alabama, Oregon and Texas and will present a comprehensive report with its conclusions and recommendations to the UN Human Rights Council in June 2015.

Special Rapporteurs, who are not UN staff and are independent from any government or organization, are appointed by and report to the Geneva-based UN Human Rights Council. 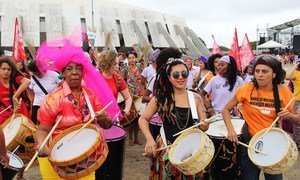