WFP/Tina Stacey
Mule trains are often used along trails cleared and re-opened by WFP to deliver food and other material to remote earthquake-stricken mountain villages in Nepal.

11 December 2015
Warning of severe shortages of food and fuel now plaguing Nepal caused by the ongoing major disruptions in imports across its southern border with India, the United Nations World Food Programme (WFP) today predicted extreme hardship for the land-locked country if prices of basic food staples continue to soar.

“If trade remains restricted and food prices continue to rise, a serious humanitarian crisis will be hard to avoid,” said David Kaatrud, WFP Regional Director for Asia and the Pacific in a news release.

According to WFP, the border blockage that began in September to protest Nepal’s new constitution has already slowed trade, causing a food and fuel shortage since the last three months.

“People are struggling to feed their families as the cost of food rises beyond their grasp. Coming so soon after the recent earthquake, this crisis could severely test people’s ability to cope, and may lead to an increase in malnutrition,” said Mr. Kaatrud.

According to WFP, Nepal is heavily dependent on imports, especially from India and the border disruptions have led to the cost of some basic food staples, such as cooking oil, rice, lentils, sugar and salt to soar in recent weeks as supplies dwindled.

The UN agency said that the average price of lentils, pulses and cooking oil have increased by more than 30 percent since August and more than 50 percent since last year and in remote areas, including parts of the country worst hit by the 25 April earthquake and aftershocks, the price of food commodities has increased even further, doubling in some cases.

At the same time, the UN agency noted that a quarter of people in Nepal on less than $1.25 a day, and on average spend 60 percent of their income on food, which means that most have only a limited capacity to cope with shocks such as disasters and soaring food prices.

“WFP urges all sides to once again allow the free flow of food items across the border to ensure that Nepalis, especially those who struggle on a day-to-day basis to feed their families, are not the ones who bear the burden of this protracted political stand-off,” said Kaatrud.

Moreover, WFP warned that the fuel shortage caused by the border blockages was hampering earthquake relief efforts and that there have been severe delays in WFP efforts to provide food assistance to more than 224,000 earthquake-affected people.

The agency said that it could only deliver one-third of food supplies earmarked for distribution by the end of the year and added that the delivery of non-food items, such as medicine and shelter material for winter, has also been severely affected by the dispute.

Earlier this week, UN agencies in a joint statement warned that the “health and humanitarian implications of the present scenario are grave” in Nepal and urged all sides to ease an effective blockade of the country’s southern border.

Over 14,000 farmers in rural Nepal to benefit from new UN project

FROM THE FIELD: Supporting Nepal’s migrants, as overseas work dries up 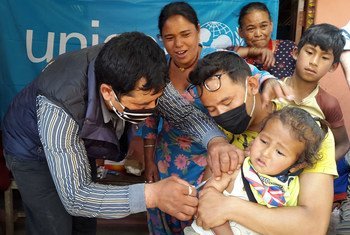 8 December 2015
United Nations agencies and their aid partners today expressed their “deepest concern” over critical and growing shortages of lifesaving medicines and supplies across Nepal and appealed to all sides to ease an effective blockade of the country’s southern border due to unrest over a new constitution.