With both sides repeatedly violating the ceasefire, endangering progress so far made towards a political transition, the South Sudan peace process is at a critical juncture and in need of increased international support, the top United Nations peacekeeping official warned today.

“Now is the time for the [UN Security] Council and international partners of the ‘IGAD Plus’ to invest politically in supporting the take-off of the transition, or the progress made could be lost,” Under-Secretary-General for UN Peacekeeping Operations Hervé Ladsous told the Council, calling for 1,100 additional UN peacekeepers to help monitor the accords.

IGAD Plus, representing the East African Intergovernmental Authority on Development and its partners, including the African Union, the UN, China, Norway, United Kingdom and United States, sponsored the peace agreement which President Salva Kiir and his former Vice-President Riek Machar signed in August to end the bloody conflict that erupted between their factions two years ago.

“We must work collectively on increasing the buy-in of the parties to the implementation of their Agreement, and actively support the institutions it has provided to put an end to this senseless conflict,” Mr. Ladsous said, stressing that the violations have led to significant civilian deaths and displacement and detailing steps needed to set up the Transitional Government of National Unity.

“As expected, the implementation of the peace Agreement is progressing slowly and with serious difficulties” he underscored.

The ongoing clashes, accompanied by increased cattle raids, looting of relief aid and human rights violations, have exacerbated humanitarian needs as each side tries to improve its military standing or regain positions lost before the beginning of the transition, he noted.

Political actions, moreover, such as the National Legislative Assembly’s recent approval of an amendment allowing the president to appoint governors and State Legislative Assembly members in the transition, could make reconciliation between the parties even more challenging.

“At this point of the peace process, any unilateral political initiative taken by either party is counter-productive. Our messaging to both parties should be clear and unequivocal: we need the Agreement, the whole Agreement and nothing but the Agreement, and we need it urgently,” Mr. Ladsous stressed.

He called for an increase of 500 troops and 600 police personnel for the UN Mission in South Sudan (UNMISS), which already has some 12,500 ‘blue helmet’ uniformed personnel on the ground, to support the monitoring mechanisms envisioned by the accords and provide increased protection for civilians both inside and outside displacement camps.

Last month, UNMISS Deputy Police Commissioner Charles Bent told the Council of the “constant, daily threats” in trying to maintain order in the so-called Protection of Civilian (POC) sites, where populations have ballooned to 180,000 over the past two years.

“Increasing protection outside of the POC sites fundamentally requires the cooperation of the Government, as well as that of UNMISS’s troop contributing countries, who have at times proven reluctant to undertake the proactive and forward-leaning posture required of the task,” Mr. Ladsous said.

“As the mission moves towards the provision of more robust support to the national authorities in the implementation of the peace agreement, it will be essential for the Government of National Unity to prove itself a willing partner.

“It must make the strategic decision to support and facilitate, rather than simply tolerate, the work of UNMISS,” he added, calling for an end to restrictions on the peacekeepers’ freedom of movement.

UNMISS also must help set up the Joint Integrated Police, Joint Operations Centre and joint military command in Juba, the capital, to help the parties work together to rebuild confidence and maintain security, and Mr. Ladsous called for a year’s extension of the Mission’s mandate to fulfil all these tasks. 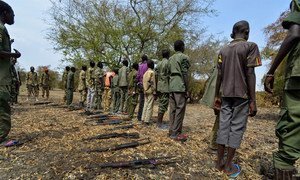 The situation of children in war-torn South Sudan has worsened since the beginning of the year, with sustained recruitment, primarily of boys but also girls, by armed forces and groups amid severe malnutrition and flight, the United Nations Children’s Fund (UNICEF) warned today.