UNICEF/Ashley Gilbertson VII
Children and their parents arrive on the Greek island of Lesbos, in the North Aegean region.
1 December 2015

About a third of the refugees and migrants who have drowned in the Aegean Sea this year were children, while the number of children applying for asylum in the European Union has doubled compared to 2014, the United Nations Children’s Fund (UNICEF) reported today, warning of the increasing perils facing youngsters as winter takes hold.

“So far, the winter had been mild, but this is changing, and the response now is not only about warm clothes, baby socks and blankets, but about providing children with a sense of stability and protection after what they have been through,” UNICEF spokesperson Sarah Crowe told a news briefing in Geneva in the latest update on the influx.

So far this year, children make up over a quarter of the 730,000 sea arrivals in Greece and the flows heading further into Europe through the former Yugoslav Republic of Macedonia, Serbia, Croatia and Slovenia, according to the latest update issued by UNICEF and the International Organization for Migration (IOM).

After a slow-down last month, the number of arrivals in Greece has increased again, with 2,500 yesterday, UN High Commissioner for Refugees (UNHCR) spokesperson William Spindler told the briefing. Some 140,000 people crossed the Mediterranean in November compared to 220,000 in October, with the slowdown due to weather and a Turkish crackdown on smuggling.

In October alone, at least 90 children died in the Eastern Mediterranean, with nearly one in five under the age of two. Most of those who have drowned this year are from Syria, Afghanistan and Iraq, and are under the age of 12.

“Unpredictable border crossings in the Balkans, the procedures taking place at those borders and the harsh winter have compounded challenges facing children on the move,” Ms. Crowe said. “Over the past month, 52 per cent of those crossing the borders in the Balkans were women and children, up from 27 per cent this summer. This crisis now became a crisis for children and their mothers.”

Babies and small children are particularly at risk, as are children with disabilities and special needs, those separated from their families during the journey, stranded children who have exhausted their resources, unaccompanied and separated adolescents, and trafficked children.

“Women who have recently given birth are less resilient to the stresses of the journey and risk being unable to continue breastfeeding, as families are swept along migration routes, through reception centres, and loaded onto buses and trains,” the update stressed.

“Babies are born every day along the migration routes – in very unfavourable conditions – and carried along as newborns… With winter fast approaching, there is a heightened risk of these children dying at sea or on land, or becoming seriously ill with hypothermia or pneumonia. Babies and small children are more at risk of drowning, as they can slip from parents’ arms during shipwrecks.”

Overall, 61 per cent of refugee and migrant arrivals in Greece are from Syria, 22 per cent from Afghanistan, 7 per cent from Iraq, and 3 per cent from Pakistan, all countries affected by conflict, insecurity and political unrest. 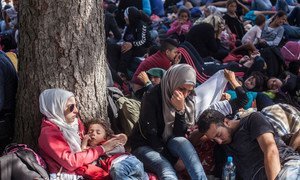