Nepal: millions of children at risk this winter due to severe shortage of essential supplies, UNICEF warns

UNICEF/Narendra Shrestha
Ten year old Babu Kaji Tamang, who gets around by crawling on all fours, at his home in Sindhupalchwok, Nepal, one of the most earthquake-affected districts.
30 November 2015

Due to severe shortages of fuel, food, medicines and vaccines, more than three million children under the age of 5 are at risk of death or disease during the harsh winter months in Nepal, the United Nations Children’s Fund (UNICEF) warned today.

“The plight that children and their families are facing in the country has been worsening by the day and will deteriorate further in the winter months,” said UNICEF Regional Director of UNICEF for South Asia, Karin Hulshof in a news release.

Over the past 10 weeks, vital imports of essential commodities have been severely restricted at Nepal’s southern border due to unrest over the country’s new constitution.

According to UNICEF, the Government’s regional medical stores have already run out of BCG vaccines against tuberculosis and stocks of other vaccines and antibiotics are critically low.

“The risks of hypothermia and malnutrition, and the shortfall in life-saving medicines and vaccines, could be a potentially deadly combination for children this winter,” said UNICEF Executive Director Anthony Lake.

Nepal, still recovering from two major earthquakes in April and May, has over 200,000 families affected by the temblors still living in temporary shelters, at an altitude above 1,500 metres where weather conditions will be harshest this winter, explained UNICEF, adding that children could be the most affected.

“During my recent visit to Nepal, I witnessed first-hand the precarious living conditions of many of the earthquake survivors. They could now be facing a new disaster – without adequate food, protection from the cold, or healthcare,” added Mr. Lake.

Further, UNICEF noted growing fears that the rising dependence on firewood because of the fuel crisis is increasing indoor pollution, which in turn could lead to a spike in cases of pneumonia, as over 800,000 children under five suffer from the condition and around 5,000 children have already died in the last year.

Additionally, the 125,000 new-borns expected in Nepal in the next two months are also at particular risk, the agency warned.

UNICEF said that ambulance services across the country have been hit by the fuel shortage, resulting in a drop in births in hospitals and health centres and the lack of fuel for heating also increases the risk of hypothermia and death for new-born babies who are not fully capable of controlling their own body temperature.

“Children need to be protected from disease, cold and hunger. UNICEF urges all sides to address the restrictions on essential imports of supplies to Nepal. There is no time to lose,” urged Ms. Hulshof. 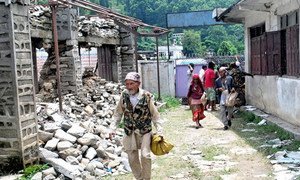 As winter approaches, the top United Nations humanitarian official for Nepal today stressed that shelter and food remain top priorities six months after the devastating earthquakes that shook the country in April.