WFP/Abeer Etefa
Displaced families and the elderly in Ukraine line up for WFP food vouchers, which enable them to obtain food including milk, fresh fruit, vegetables, eggs and meat.
20 November 2015

The United Nations World Food Programme (WFP) has announced the start of food distribution to about 7,000 hospital patients and school children in conflict-affected areas in eastern Ukraine.

“The conflict has resulted in shelling into residential areas resulting in deaths and injuries of civilians and destruction of property and infrastructure including, hospitals and schools,” said, Giancarlo Stopponi, WFP Representative in Ukraine, said in a news release.

He added that providing food in those institutions would ensure that their vulnerable populations have access to sufficient nutritious food to stay healthy.

According to WFP, the food assistance will be distributed by ADRA Ukraine, which is a part of worldwide network of Adventist Development and Relief Agency (ADRA), to patients in hospitals and school students in many towns of Donetsk and Luhansk oblasts.

In partnership with several non-governmental organizations, including ADRA Ukraine, WFP has confirmed that it has provided food assistance to more than 250,000 people among the most venerable population affected by the conflict in east Ukrainian regions. Under its ongoing Emergency Operation launched in November 2014, WFP plans to provide assistance to 575,000 people by the end of 2015. 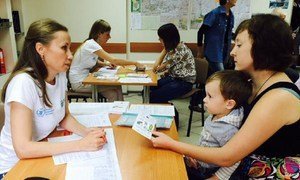 The United Nations World Food Programme (WFP) said today it will scale up its emergency operation in eastern Ukraine to provide 500,000 conflict-affected people in the region with food assistance until the end of the year.