Voicing deep concern at those who exploit the suffering of refugees to stoke xenophobia and spew hate speech, United Nations Secretary-General Ban Ki-moon today called on European leaders, and the world at large, to stand true to the values of human of rights and respect the dignity of people fleeing conflict and poverty in Syria and elsewhere.

“The current policies are clearly not adequate,” he stressed in an opinion piece published in the Paris newspaper Le Figaro on the mass influx of refugees and migrants from Syria, Iraq, Afghanistan and African countries into Europe.

“It is time for the international community to develop a global response to mass population flows. I am working to bring countries together behind more a humane and coordinated approach. Progress would serve the common interest of all nations.”

He warned that sealing borders, criminalization and detention will not resolve any problems, calling on countries instead to provide more safe and legal avenues for migrants and refugees to enter, more resettlement opportunities, better local integration options and greater investments in chronically underfunded relief operations.

“With creative thinking, we can generate opportunities for more migrants and refugees, for example through private sector scholarships, humanitarian visas and diaspora sponsors,” he wrote. “This compassionate response is also an effective way to combat smuggling and trafficking networks that thrive on desperate people.”

Recalling his recent visits to refugees in camps in Lebanon, Jordan, Turkey and other host countries, Mr. Ban wrote that a six-year-old boy caught his eye because he himself was a refugee in his native Korea at that age: “I was forced to flee my own home during the Korean War.”

“Although I never had to travel as far as they did, and was spared many of the ordeals that have left them scarred, I knew all too well the confusion and fear of abandoning my village as bombs fell. I will never forget watching my grandfather frantically search for something to feed us on the mountainside where we hid.”

“I was too young to understand terms such as ‘collective security’ but when I saw the multinational troops serving under the United Nations flag, I knew we were not alone. And when the UN provided us with life-saving supplies, I felt the beginnings of responsibility to give back to the world that had saved me,” he added.

“Like millions of Europeans and others who pieced back together shattered lives following the end of the Second World War, today’s arrivals want what all people want: safety, stability and a better future for their loved ones.”

Mr. Ban concluded by quoting children he met at the Tenda di Abramo centre in Rome who “sang of how they had travelled from different continents, concluding their performance with a message for the world: ‘But what difference does it make? We are all humanity.’” 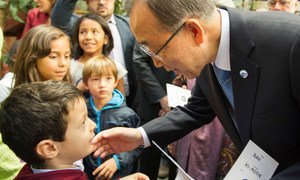 'I am standing with these refugees,' says Ban visiting reception centre in Rome

After meeting with families of refugees at a reception centre in Italy today, United Nations Secretary-General Ban Ki-moon said the global community has to “stand with people who do not have any means” and provide basic necessities, such as education and sanitation.