The United Nations Secretary-General Ban Ki-moon today expressed deep concern at the continuous resort to hate speech, provocation of communal hostilities and the abuse of religion for political purposes, incited by “extreme element among the majority community in Myanmar”.

“With the approaching elections on 8 November, he urges all concerned in Myanmar to eschew any kind of pressure, intimidation, dissemination of hatred or violence against individuals or organizations based on their ethnic identity, gender, religious persuasion or political views,” said a statement issued by Mr. Ban's spokesperson in New York.

Mr. Ban noted the antagonism displayed in certain quarters against international organizations, including the United Nations.

“He is concerned that continued impunity for such behavior could gravely damage the international image of the country,” said the statement.

Additionally, the UN chief deplored the particularly the vulgar remarks recently directed, not for the first time, against the Special Rapporteur of the United Nations Yanghee Lee, for carrying out her mandate.

“The Secretary-General has addressed a letter to President U Thein Sein expressing his full confidence in and support for the important work being done by Special Rapporteur Yanghee Lee,” the statement concluded. 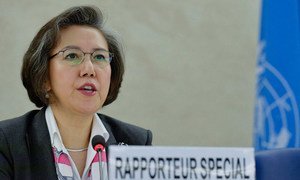 A United Nations independent expert today called on all those in positions of authority in Myanmar to ensure that respect for the human rights of all must be at the core of the historic elections due to take place in 10 days’ time.