A United Nations independent expert today called on all those in positions of authority in Myanmar to ensure that respect for the human rights of all must be at the core of the historic elections due to take place in 10 days’ time.

“It is vital that the elections are conducted in an environment that encourages participation from all sectors of society. In the same vein, it is crucial that divisions and tensions are not manipulated for political purposes,” she continued.

The Special Rapporteur said that the exercise of the rights to freedom of expression, peaceful assembly and association are indispensable ahead of a democratic election and must be ensured.

“I have observed worrying trends that have been undermining the democratic space in Myanmar. The arrests, convictions and harassment of civil society and journalists should immediately cease. Independent voices are vital and must be included in public debate,” said Ms. Lee.

Moreover, she expressed concern about the disenfranchisement of hundreds of thousands of individuals from across society, and about the disqualification of many Muslim candidates from standing for election.

The UN expert also highlighted the increasing influence of extreme religious nationalist movements in the political process, noting an apparent lack of action taken against disturbing public statements from religious leaders and members of political parties that could amount to incitement to hatred against minorities.

Meanwhile, speaking on the margins of the UN General Assembly’s Third Committee in New York, the Special Rapporteur addressed the human rights impact of the continuing conflict across parts of the country; the continuing institutionalized discrimination against the Rohingya community and the restrictions to freedom of movement in Rakhine state; as well as the prevalence of land grabbing, land confiscations and forced evictions.

“With the recent signature of the nationwide ceasefire agreement and the elections to come, the extent to which human rights are respected and protected in this critical period will greatly impact the future of Myanmar,” she added.

She expressed her dismay at the adoption of four discriminatory laws aimed at “protecting race and religion,” which she stressed do not conform with Myanmar’s human rights obligations.

“There is a clear need for continued legislative and constitutional reform to bring the country’s legal framework in line with international human rights laws and standards,” she said.

Finally, the UN Special Rapporteur urged the international community to remain constructively and critically engaged on human rights. “Now, more than ever, it is critical for all actors to work together to support further reforms in Myanmar,” she said. 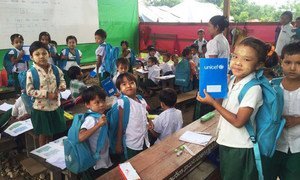 In the light of upcoming elections in Myanmar and amid reports of rising religious intolerance, the United Nations Children’s Fund (UNICEF) today welcomed a joint statement by the leaders of four main religious groups in the country calling for tolerance and respect of religious freedom as essential conditions for every child to grow and develop to their full potential.