The effort towards forming a unity government in Libya will continue, the United Nations envoy for the country said today, emphasizing that while a position had been announced that some parties had not voted for the UN-backed political agreement, “there is no chance for small groups or personalities to hijack this process.”

Speaking at a press conference in Tunis, UN Special Representative for Libya Bernardino León said that there had been a position on the agreement announced by the Speaker of the House of Representatives, which was then followed by “a statement signed by what seems to be a majority of the members insisting that there was no proper vote and that no proper decision [was] taken.”

“Unfortunately, all these groups or personalities that are opposing the political solution have not been able to put on the table any alternative,” he added, referring to the UN-backed political agreement, negotiated by Libyan parties, aimed at ending the crisis in the country.

The process is owned by Libya, not the UN, and the negotiations had included Libyans from all political and geographic regions, he explained, adding that “this is the most important asset this dialogue has.” The UN had facilitated the process but had not proposed names for the national unity government.

Mr. León also responded to criticisms that Benghazi was not being properly taken into account during the political process. He said that in his last Security Council report he had “insisted that we have to express awareness and solidarity with the people from Benghazi” but could not make decisions on the matter as it was up to those involved in the Libyan dialogue.

“So let’s leave the Libyans to answer this question, it will not be the international community or the United Nations that can impose this on the others,” he said. “The basis of our dialogue has been consensus and it will continue to be consensus.”

Mr. León also reiterated the support of the international community for the process.

“This Libyan proposal has been supported strongly by the international community and I think Libyans can be proud to have this support from all these international actors and I think this is a very important asset for this,” he said.

He also noted “the wave of support, the wave of requests to go on from what I believe is a strong majority of the Libyans” and said that “the process is going on, we will convene new meetings in the coming days to listen to proposals and ideas from the Libyans involved in the process and those outside the process to go on,” adding that “it is important that the Libyans see that we go on and that the proposals from this dialogue will prevail.”

After months of talks – the dialogue that began earlier this year in Geneva has travelled to Morocco, Algeria and Libya itself dealing with different parties and tracks, including civil society representatives, political parties and political leaders – the United Nations assisted in drafted a proposed agreement to form a government of national and in early October, a six-member executive council was proposed to lead it. 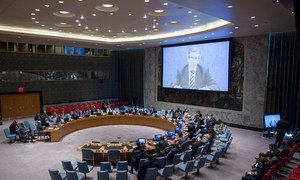 Recalling their statement last week which commended Libyan dialogue participants on finalizing a political agreement for the creation of a Government of National Accord, members of the UN Security Council today urged all Libyan parties to endorse and sign it.