UN Photo/Amanda Voisard
A wide view of the Security Council’s debate on its own working methods.
20 October 2015

During a debate on the working methods of the Security Council, the President of the General Assembly, as well as the Deputy Secretary-General and the Vice President of the Economic and Social Council (ECOSOC) emphasized the need for continued and improved interaction between the main bodies of the United Nations.

General Assembly President Mogens Lykketoft said the annual debate on the Security Council’s working methods was “extremely timely,” and noted “the benefit of the institutional relationship and interaction between the Security Council and the General Assembly, particularly this year, as together we bring forward the process to select and appoint the next Secretary General.”

Mr. Lykketoft continued by highlighting that the relationship between the General Assembly and the Security Council was “mutually reinforcing and complementary,” noting areas of work which were closely linked, such as peace and security issues, the UN Charter review, the appointment of the Secretary-General, and the relationship between the Council and some of the subsidiary organs established by the Assembly.

As an example of the interdependence of the work of the two bodies, Mr. Lykketoft mentioned the General Assembly’s election of five new, non-permanent members to the Security Council for 2016-2017.

Turning his remarks to the appointment of the next Secretary-General, Mr. Lykketoft said that for years there had been “widespread calls for increased transparency, inclusivity and a more rigorous process in selecting the next chief of this Organization,” and that, as President of the General Assembly, he would be working with the President of the Security Council to begin the process of soliciting candidates.

He also highlighted the importance of including women among the candidates for the leadership position.

“I am absolutely confident that there are any number of potential female candidates who come with all these credentials and more,” said Mr. Lykketoft. “Bearing in mind that in 70 years the UN has never had a female Secretary-General, the inclusion and consideration of woman candidates should be an important focus for all of us as we ensure that this organization continues to advance gender equality on all levels.”

The Vice-President of the Economic and Social Council (ECOSOC), Sven Jürgenson, also addressed the Security Council, calling the meeting “a welcome step in the improvement of cooperation between United Nations Charter bodies.”

Mr. Jürgenson spoke about ECOSOC’s relationship with the Council, noting that Article 65 of the UN Charter states that ECOSOC may furnish information to the Security Council and shall assist it upon request. This provision, he said, had seen very limited use.

“Its most constructive incarnation is probably the establishment in by the Economic and Social Council of its Ad Hoc Advisory Group on Haiti,” he said, noting that the Group “continues to exist and contributes to the promotion of coherent and sustained development support to Haiti.”

Following the example of the Haiti Group, and responding to a request made by the General-Assembly, similar groups were set up for Guinea-Bissau and Burundi, which were active from 2003 to 2006, he added.

“These Groups, which promoted a comprehensive approach to peace and development in post conflict settings, prefigured the country specific configurations of the Peacebuilding Commission, for which they constituted an ‘avant garde,’” he said, which led to “enhanced interaction between ECOSOC and the Security Council.”

Mr. Jürgenson said that the relationship between the Charter bodies of the UN should be revitalized.

“The changing nature of conflict, from inter-State wars to complex civil conflicts that are intractable and reoccurring, highlights the fundamental link between sustainable development and lasting peace,” he said.

ECOSOC and the Security Council, he said, can interact on a regular basis on issues of concern to them both, from the promotion of institution building and improved governance to the consequences of economic and financial crises on global stability and the impact of environmental degradation on weakened societies.

“On each dimension of sustainable development, economic, social or environmental and on their contribution to the overall objective of peace, the UN development system, under the oversight of ECOSOC, has a lot to contribute,” he said. “The Economic and Social Council can be the counterpart of the Security Council to embrace a truly holistic approach to peace and security, an approach that world leaders have recognized as the only one which can lead to sustainable results.”

Deputy Secretary-General Jan Eliasson also addressed the Security Council on its working methods, noting that the UN Secretariat “has always been and will remain a vital partner of the Council,” translating the mandates of the Security Council into peacekeeping operations, special political missions, sanctions monitoring groups, and other bodies.

He also spoke about the informal Working Group on Documentation and other procedural questions, noting that it was an important interface between the Council and the Secretariat.

“This Working Group has given more transparency to the Council’s work, through its crafting of Notes, subsequently issued by the President, documenting trends of relevance to the wider UN membership including to troop and police contributing countries,” he said.

He also outlined several decisions the Council had reached on its working methods, along with the actions that the Secretariat has taken to implement them, from monthly briefings provided by the Department of Political Affairs on situations which could turn into threats to international peace and security, as well as its work improving cooperation on sanctions through the Inter-Agency Working Group on UN Sanctions. 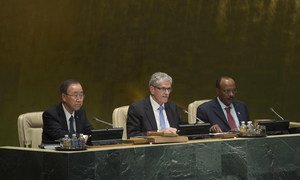 A major priority for the 70th session of the United Nations General Assembly is to ensure that all actors move swiftly to deliver on the promises being made for sustainable development, the President of the 193-member body said today.