In Rome, Ban says refugee and migration crisis is a ‘defining moment for Europe and the world’

The current refugee and migration crisis is a “defining moment” for Europe and the world, United Nations Secretary-General Ban Ki-moon declared in Rome today, where in an address to Italian Government officials, he thanked Italy for its “compassionate and courageous response” while continuing his strong call on all countries to bear more of the responsibility.

“Italy has always been a bridge across cultures and continents,” he told the Chamber of Senate and Deputies in Rome in an address kicking off his three-day official visit to the country.

“Today, you have drawn on this experience to forge a strong, courageous and compassionate response to the biggest refugee and migration crisis since the end of the Second World War. I commend highly the men and women of Italy who have saved tens of thousands of lives.”

He thanked Italy for its “resources, energy and empathy for the thousands of desperate people arriving here in search of safety,” noting that Italy was a leader in European rescue efforts.

“These are urgently needed to stop the thousands of needless deaths that are turning the Mediterranean into a sea of tears,” he said.

The UN chief stressed that millions of forcibly displaced people from Syria are being hosted by its neighbours, such as Lebanon, Jordan, Turkey and Iraq and some in Egypt and North Africa. Like those countries, Italy’s shoreline makes it a frontline state for refugees from the Middle East and Africa, he stressed. 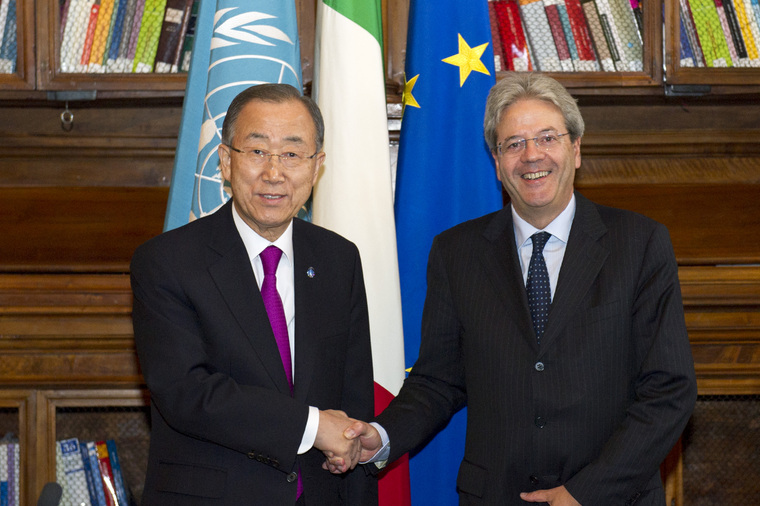 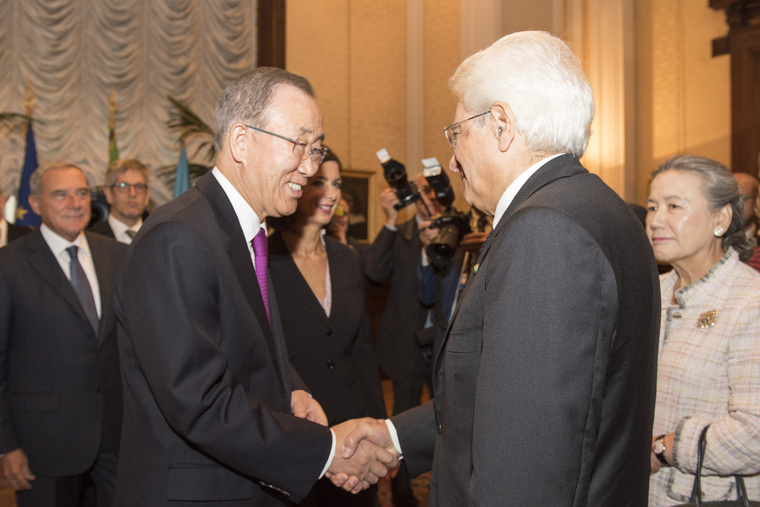 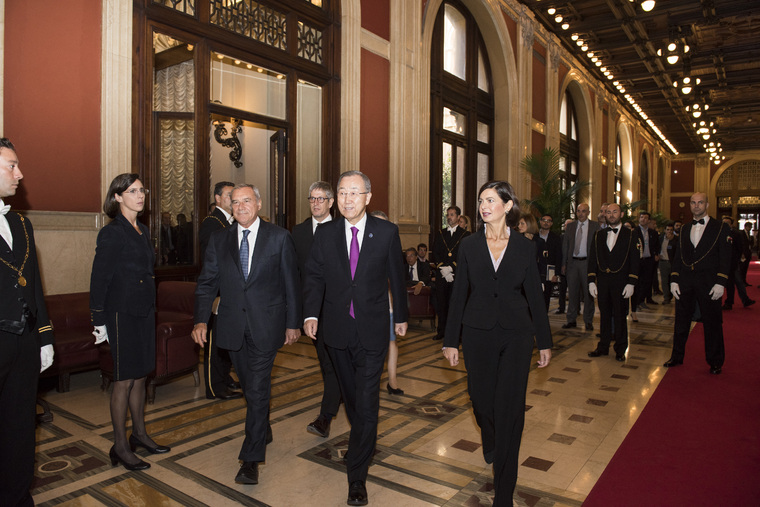 Secretary-General Ban Ki-moon (centre) is welcomed by Pietro Grasso, President of the Senate of Italy, and Laura Boldrini, President of the Chamber of Deputies, on arrival at the Palazzo Montecitorio to address the Italian Parliament. UN Photo/Rick Bajornas 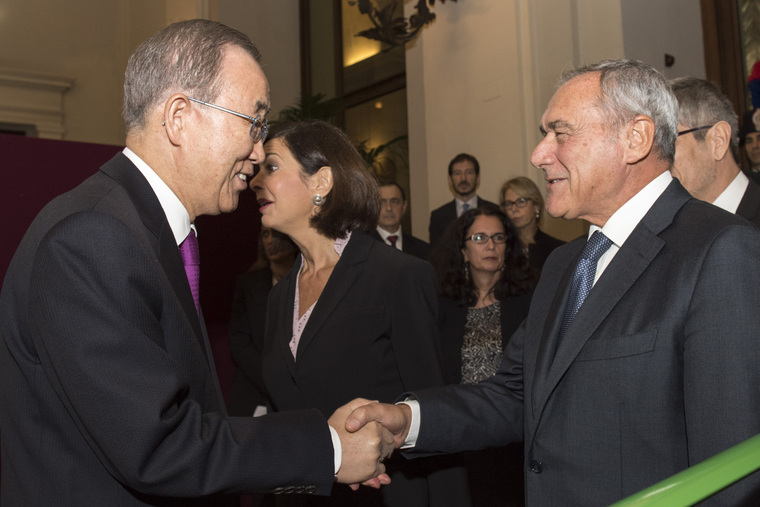 Secretary-General Ban Ki-moon (left) is welcomed by Pietro Grasso, President of the Senate of Italy, on arrival at the Palazzo Montecitorio. UN Photo/Rick Bajornas 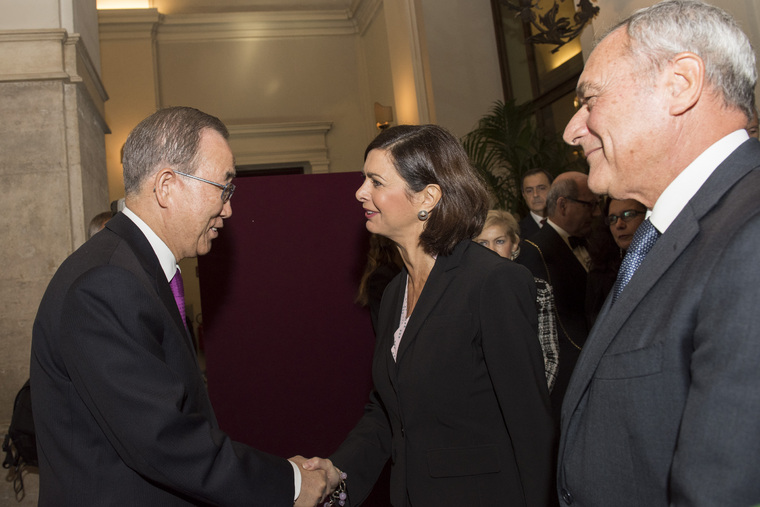 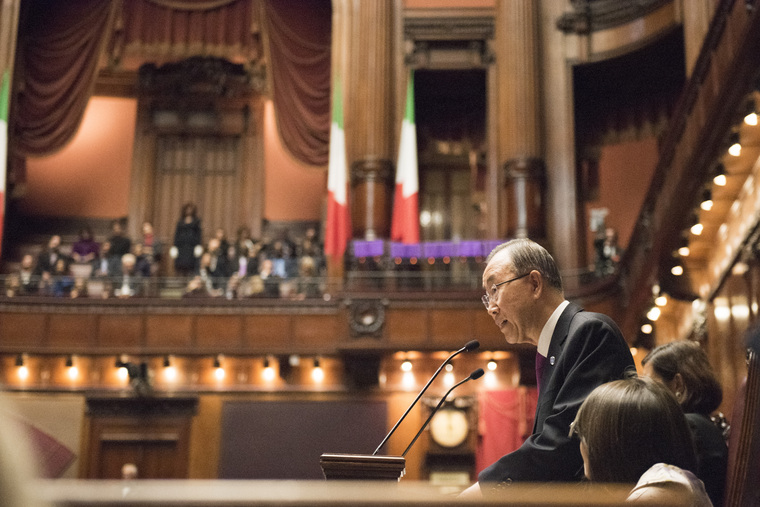 Secretary-General Ban Ki-moon addresses the Chamber of Deputies and Senate of Italy on the occasion of the 60th anniversary of Italy’s accession to the United Nations. UN Photo/Rick Bajornas 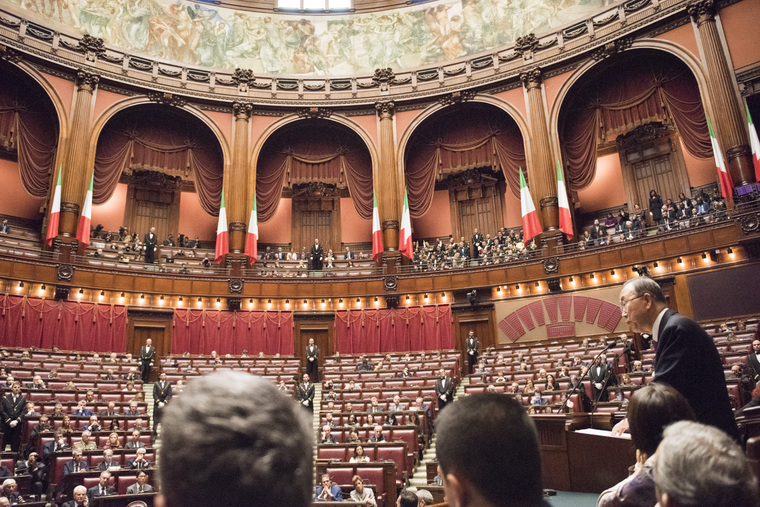 While applauding the global solidarity shown by these countries in bearing more than their share of responsibility, he went on to emphasize: “proximity does not equal final responsibility. All countries have the same duty no matter how close they are to a crisis.”

“The war in Syria is the world’s worst humanitarian crisis,” he continued, adding that his Special Envoy, Mr. Staffan de Mistura, a former Deputy Foreign Minister of Italy, is leading the effort “to forge a lasting political solution.”

The Secretary-General also noted the threat to peace posed by violent extremists across the Middle East, North Africa and beyond.

“We must stop the atrocities, especially the attacks against women and girls,” he said. “We must also end the destruction of cultural heritage.”

He went on to recall the scores of Italians who have lost their lives in the cause of peace and stability. “We thank the thousands of sons and daughters of Italy who have served under our blue flag of the United Nations over the years,” he said, noting the murder of 13 Italian peacekeepers in the Congo in 1961.

“Today – out of all the western nations – Italy is the top troop contributing country to United Nations peacekeeping operations,” he continued. “Italian support has been especially valuable for the United Nations mission in Lebanon. The fighting in Syria is putting intense pressure on Lebanon – and the United Nations is doing everything possible to respond, with Italy’s critical support.”

He also welcomed Italy’s renewed commitment to foreign aid and its goal to become a top donor among G7 nations, and praised its backing for preventive diplomacy and conflict resolution.

Turning his remarks to the 2030 Agenda for Sustainable Development, he called on Italy “to lead on this bold agenda” and welcomed its Government’s Intended Nationally Determined Contribution (INDC) on climate change, which had been submitted in the context of the European Union.

In his concluding remarks, the Secretary-General noted that “the UN is now facing, like all members of the UN Member States, many crises: security and peace crises, humanitarian crises and the abuse of human rights,” adding that what was needed was “global solidarity, global support.”