UN Photo/Mark Garten
International Day for Disaster Reduction 2015 is dedicated to the power of traditional, indigenous and local knowledge. Shown here, indigenous Inuit women in the Uummannaq community of Greenland.

13 October 2015
United Nations Secretary General Ban Ki-moon today stressed the “indispensable” power of traditional, indigenous and local knowledge in his message on this year’s observance of the International Day for Disaster Reduction.

“Traditional and indigenous knowledge is the indispensable information base for many societies seeking to live in harmony with nature and adapt to disruptive weather events, a warming globe and rising seas,” Mr. Ban said in his message on the International Day.

The Secretary-General recalled a conversation he had earlier in the year with the President of Vanuatu at the opening of the Third UN World Conference on Disaster Risk Reduction in Sendai, Japan. Vanuatu was at that time being hit hard by Cyclone Pam.

“The force of the storm led to expectations that there would be great loss of life. Thankfully, this was not the case. One reason was that cyclone shelters built in the traditional style from local materials saved many lives,” explained Mr. Ban.

“Resilience is the sum of many such acts of disaster risk reduction at the local level,” said the UN chief, noting in another example that the low-tech local knowledge in Cameroon passed down from generation to generation, helped farmers to cope with drought and protect their crop from pests.

Based on the impacts of climate changes in Arctic, which can expand to all humanity, the Secretary-General said: “Local knowledge of the impacts of urbanization, population growth, eco-system decline and greenhouse gas emissions is especially important in an era when more and more disasters are climate- and weather-related.”

He also said that building resilience to disasters is also a key feature of the newly adopted Sustainable Development Goals, the framework that will guide our efforts to end poverty and promote shared prosperity on a healthy planet by 2030.”

Meanwhile, in her remarks, Irina Bokova, the Director-General of the UN Educational, Scientific and Cultural Organization (UNESCO) also mentioned that the Sendai Framework “campaigns for greater cooperation between governments, local authorities, communities and indigenous peoples in the formulation and implementation of policies and standards for natural disaster prevention.”

Ms. Bokova said the agency is committed to the widest possible dissemination of indigenous knowledge to meet the challenges of climate change and natural hazards, especially in remote areas.

The local shelters in Vanuatu had not only protected its people, according to UNESCO, “this traditional and indigenous knowledge also helps to protect the cultural heritage against natural hazards.”

She concluded her statement with calls for expanding on and integrating knowledge and expertise wherever they may be found. “It is the key to building societies that are all the more resilient when they are inclusive.” 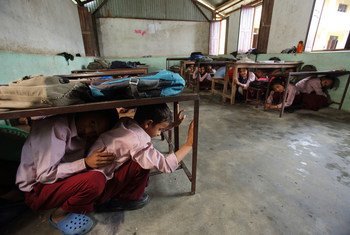 18 March 2015
Death, destruction and displacement wrought by natural disasters would be significantly reduced by 2030 under a new framework adopted by countries attending the Third United Nations World Conference on Disaster Risk Reduction, in Sendai, Japan, where they also affirmed the “urgent and critical need” to anticipate, plan for and reduce such risk to more effectively protect people, communities and countries, and to build resilience.