Students in Matatirtha, Nepal, which is in the process of being redeveloped to make the school more earthquake proof. As part of this process children are taught how to take shelter beneath their desks in case of an earthquake. Photo by Jim Holmes for AusAID.(13/2529)

18 March 2015
Death, destruction and displacement wrought by natural disasters would be significantly reduced by 2030 under a new framework adopted by countries attending the Third United Nations World Conference on Disaster Risk Reduction, in Sendai, Japan, where they also affirmed the “urgent and critical need” to anticipate, plan for and reduce such risk to more effectively protect people, communities and countries, and to build resilience.

Adopting the Sendai Declaration and Framework for Disaster Risk Reduction 2015-2030 after days of discussions and a final 30-hour negotiating session, 187 UN Member States attending the Conference approved seven targets, four priorities and a set of guiding principles, underscoring that substantial reduction of disaster risk requires perseverance and persistence, “with a more explicit focus on people and their health and livelihoods, and regular follow up.”

Recognizing the increasing impact of disasters and their complexity in many parts of the world, the Member States in their Declaration called all stakeholders to action, “aware that the realization of the new Framework depends on our unceasing and tireless efforts to make the world safer from the risks of disasters in the decades to come for the benefit of present and future generations.”

Echoing the views of many speakers throughout the week, the Declaration also noted that Sendai, in the midst of what was hailed as a “vibrant recovery” following a massive 2011 earthquake and tsunami that triggered a nuclear accident at the Fukushima Daiichi Nuclear Power Plant, proved a well-timed location the Conference, which was devoted to updating the landmark disaster resilience agreement reached in 2005 in Hyogo, Japan.

The Hyogo Framework for Action (HFA), was itself crafted in the wake of the devastation of the Indian Ocean tsunami, which claimed 227,000 lives. The HFA has since produced some important successes, including the reduction in the number of people directly affected by natural disasters in Asia – where most such disasters occur – by almost one billion.

Yet the Sendai outcome acknowledges that over the past decade, disasters had continued to take a heavy toll, killing more that 700,000 people, injuring 1.4 million, and leaving some 23 million homeless as a result. Overall, more than 1.5 billion people were in some way touched by disaster and worldwide economic losses topped $1.3 trillion.

With the world facing this stark reality, the new accord – the first intergovernmental agreement of the UN post-2015 sustainable development era – seeks to achieve, over the next 15 years, “the substantial reduction of disaster risk and losses in lives, livelihoods and health and in the economic, physical, social, cultural and environmental assets of persons, businesses communities and countries.”

The targets also increase in the number of countries with national and local disaster risk reduction strategies by 2020; enhanced international cooperation; and increased access to multi-hazard early warning systems and disaster risk information and assessments.

Margareta Wahlström, head of the UN Office for Disaster Risk Reduction (UNISDR), said adoption of the new framework “opens a major new chapter in sustainable development” as it outlines clear targets and priorities for action which will lead to a substantial reduction of disaster risk and losses in lives, livelihoods and health.

“Implementation of the Sendai Framework over the next 15 years will require strong commitment and political leadership and will be vital to the achievement of future agreements on sustainable development goals and climate later this year,” she said.

“As the UN Secretary-General Ban Ki moon] said here on the opening day, sustainability starts in Sendai,” she said, as the Conference had successfully kicked off a particularly crucial year for the United Nations, with world leaders set to meet in Addis Ababa in July to discuss development financing, then again in New York in September to adopt a new development agenda, and finally in Paris in December to forge a meaningful, binding climate change agreement.

The work of the Conference, which opened on 14 March, began on somber note, as a powerful cyclone was pummeling Vanuatu and distant neighboring islands in the South Pacific. Mr. Ban has pledged the support of the entire United Nations system as the extent of the devastation to the small island has slowly begun to emerge.

The World Conference was attended by over 6,500 participants including 2,800 Government representatives from 187 governments. The Public Forum had 143,000 visitors over the five days of the conference making it one of the largest UN gatherings ever held in Japan. 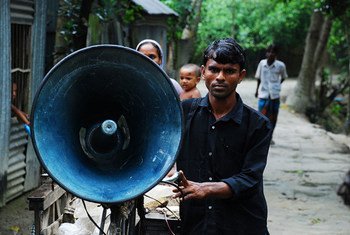 16 March 2015
When disaster strikes, the surest way to save more lives is to get targeted, practical information quickly out to communities, United Nations experts told delegations gathered in Sendai, Japan, but stressed that even the most technically impressive systems “are useless” if people are not reached or do not understand the warning.