<a href=http://bit.ly/1KSGyJJ>Jodi Hilton/IRIN</a>
Migrants and asylum-seekers, mostly Syrian Kurds, sit in the yard outside a schoolhouse-turned-reception centre, known as Vrazhdebna, on the outskirts of the Bulgarian capital Sofia.
6 October 2015

Warning that Europe’s “narrow, exclusion-focused [migration] policies have clearly failed,” the United Nations High Commissioner for Human Rights today urged the European Union to make certain that upcoming policy discussions undertaken in light of the region’s refugee crisis are grounded firmly on the need to protect the human rights for all migrants.

“A migration policy that seeks simply to exclude irregular migrants, without taking into account a holistic analysis as to why they are moving, is unlikely to result in better management of migration,” Zeid Ra’ad Al Hussein said in a press release.

Instead, such policies are very likely to come at an unacceptable cost to the rights of migrants, including more deaths, detention and abuse of innocent people, he warned.

“These ‘hotspots’ seem to be conceived not simply as a means of registering new arrivals, but also as a way of preventing them from moving further until it is decided whether they are in need of international protection or should be returned,” Mr. Zeid said.

“While we welcome the efforts of the EU to offer support to the frontline Member States receiving large numbers of migrants, States must ensure that these ‘hotspots’ are not, in effect, detention centres in disguise,” he added.

Mr. Zeid observed that Italy and Greece have reduced the use of immigration detention. He added that it is important to guard against a return to a practice which is fraught with human rights concerns centred on the legality and conditions of detention.

“I urge the EU and its individual Member States to avoid the ugly spectre of arbitrary or prolonged detention of people who are not criminals, and to ensure the adoption of human rights-based alternatives to detention,” he said.

He welcomed the earlier decision by the EU Justice and Home Affairs Council on the relocation of 120,000 asylum seekers from Greece and Italy and also commended the EU’s commitment to provide more funding to improve conditions for the millions of Syrians displaced to neighbouring countries.

However, he stressed retreating from the flawed view of considering law enforcement as the sole panacea to curtail contemporary migration issues, especially when scores of people are fleeing their countries due to severe human rights violations or collapsing economies.

“Increased border control and surveillance have not reduced the number of new arrivals; they have only forced them to use more dangerous routes, leading to increased human rights abuses and loss of life,” he said, adding that rather than ‘destroying the business model of smugglers,’ the emphasis on law enforcement coupled with the near absence of legal channels for refugees and migrants to enter EU territory have enabled unscrupulous smugglers to expand their business by preying on desperate individuals who have no other option.

He elaborated by pointing out that strengthening of border control and surveillance, including building a fence along Greece and the Turkish border, led to scores of desperate refugees and migrants crossing the risky Aegean Sea from Turkey to the Greek islands.

“A few years ago, most refugees and migrants entered Greece by land,” Zeid said. “It was the sealing of the land border which, more than anything else, pushed them to resort to the dangerous sea route instead,” he added. 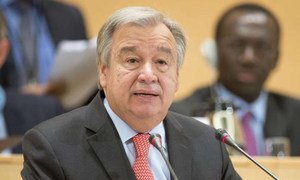 The global refugee crisis is so great that the Office of the UN High Commissioner for Refugees (UNHCR), other UN agencies and their partners today said that they are struggling to respond to and meet all the humanitarian needs they face.