Over 500 children dead, 1.7 million at risk of malnutrition owing to Yemen violence – UN

The United Nations Children’s Fund (UNICEF) today underscored the devastating toll six months of violence has taken on the children of Yemen, where at least 500 have lost their lives and more than 1.7 million are at risk of malnutrition.

Across the country, nearly 10 million children – 80 per cent of the country’s under-18 population – need urgent humanitarian assistance. More than 1.4 million people have been forced to flee their homes, the agency said in a news release.

“With every day that passes, children see their hopes and dreams for the future shattered,” said UNICEF Representative in Yemen Julien Harneis. “Their homes, schools and communities are being destroyed, and their own lives are increasingly threatened by disease and malnutrition.”

UNICEF pointed out that even before the conflict, the nutrition situation was dire as Yemen produces less than 10 per cent of its food needs and relies heavily on imported foodstuffs. However, the escalation of the fighting has caused food insecurity to spiral and malnutrition to spike.

The consequences for children are “dramatic,” said UNICEF, noting that the number of children under five at risk of severe acute malnutrition has tripled in 2015, with 537,000 children now at risk, compared to 160,000 children before the conflict.

In addition, almost twice as many children under five, a total of 1.2 million children, are projected to suffer from moderate acute malnutrition this year, compared to 690,000 before the crisis.

The agency attributes the deterioration to food shortages and poor access to markets caused by the conflict, reduced access to health facilities and sanitation, and the disruption of livelihood opportunities. Scarcity of fuel, electricity, gas, water and other services and utilities is further exacerbating the situation.

The last six months have also seen a growing number of attacks on civilians and vital infrastructure, according to UNICEF. Since the escalation of the conflict in March 2015, it has verified attacks on or damage to 41 schools and 61 hospitals as a result of the fighting.

Despite these extremely challenging conditions, UNICEF and its partners have been at the centre of humanitarian operations since the beginning of the conflict. The response has focused on providing drinking water and sanitation, education and child protection services as well as treatment of children with malnutrition, diarrhoea, measles and pneumonia.

The agency has also provided psychological support to help children cope with the horrors of the conflict, as well as education material on avoiding unexploded ordnances and mines.

According to State of the Crisis: Explosive Weapons in Yemen, a new publication produced by the UN Office for the Coordination of Humanitarian Affairs (OCHA) and the United Kingdom-based charity Action on Armed Violence (AOAV), Yemen is the worst country for civilian deaths and injuries from explosive weapon use in the first seven months of 2015.

In March 2015, a long and complex political crisis in Yemen rapidly escalated into all-out conflict. As the fighting has spread across the country, millions of civilians are suffering from the violence.

The spiralling crisis has been characterized by the use of explosives with wide-area effects in populated areas. “All parties to the conflict have repeatedly used heavy weapons in the fighting since March,” says the report, which explains when explosive weapons were used in populated areas, civilians made up 95 per cent of reported deaths and injuries.

The impact of explosive weapons in Yemen goes far beyond the immediate deaths and injuries recorded by AOAV. The report uses testimonies and experiences of victims and witnesses to illustrate some of the long-term impacts that can cause extensive suffering far into the future, even after the fighting ends.

“Our findings show Yemen is the worst country in the world this year for civilians affected by explosive violence, more devastating even than the crisis in Syria and Iraq,” said Robert Perkins, author of the report. “An already vulnerable population is now faced with a country reduced to rubble by falling bombs and rockets. Their homes destroyed, their families torn apart, it will take a many years to recover from the last few terrible months in Yemen.

AOAV and OCHA are urging all the parties to the conflict – national forces and non-State armed groups – to heed the UN Secretary-General’s call to avoid the use of explosives with wide-area effects in populated areas. 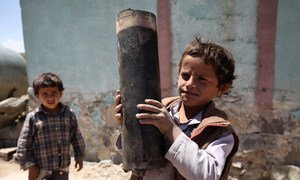 Describing the current situation in Yemen as “beyond tragic” for all affected by the hostilities, a senior United Nations official said it is “ever more important” for both the Security Council and the international community to promote political dialogue aimed at ending violations against children.