The President of the Dominican Republic, among other leaders of small island developing States addressing the General Assembly today, noted the importance of tackling climate change as a key part of the broader work of ensuring sustainable development for all.

He also spoke of the new UN development agenda and the opportunity it offered to combat inequality, which he said was “the great enemy of sustainable development.”

Citing a 2014 study by the UN Economic Commission for Latin America and the Caribbean (ECLAC), Mr. Medina Sánchez said that growth with equity required a “responsible productive sector that guarantees the generation of wealth in all layers of society.”

“Along with the necessary transformation of our economic structures, the second pillar of the fight against inequality has to be the State,” he continued. “We must regain the role of the State as an efficient wealth distributor, as a creator of opportunities and as a defender of the rights of all citizens.

Seychelles’ President, James Alix Michel, stressed UN institutional reform before he discussed the impact of climate change on small island developing States (SIDS), which he called the “sentinels of nature and the guardians of the oceans.” 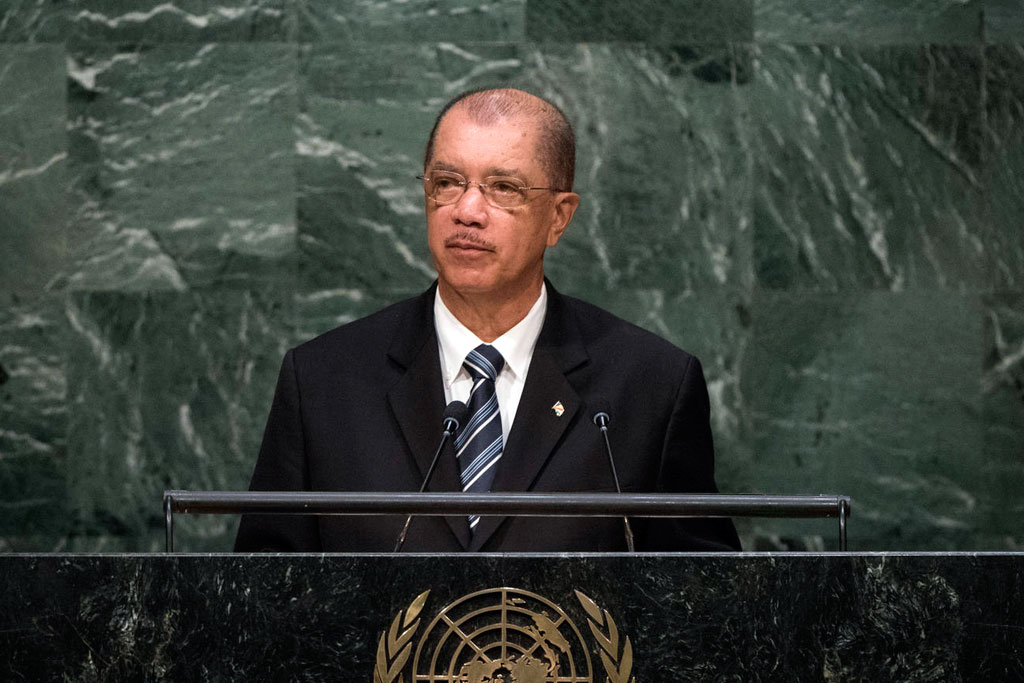 President James A. Michel of the Seychelles addresses the general debate of the General Assembly’s seventieth session. UN Photo/Cia Pak

Mr. Michel said “we must break the present growth model” and place nature over consumerism in order to minimize the effects of climate change.“Climate change is not of the making of the small island developing States, but we bear the full brunt of it, which is why we will never cease to raise the issue in every forum, including this one, because we are the conscience of the world,” he declared.

Mr. Michel also spoke about the special and differentiated treatment of SIDS, cautioning that a “one size fits all approach to development cannot be the order of the day.”

“We, the inhabitants of SIDS shall constantly remind you of this because islands remain the moral compass of the world, because our own agenda is inextricably linked to humanity’s,” he added.

He also noted the importance of Goal 14 of the 2030 agenda to all SIDS and coastal States, emphasizing that it presented a “unique opportunity for global governance of the oceans and seas” and a mechanism to realize sustainable growth for SIDS based around an ocean economy.

Referring to the upcoming climate negotiations in Paris, Mr. Michel said that “it will be a crucial and decisive moment of choice for all of us,” adding that “we cannot allow ourselves to be condemned to the wrong side of history” and called on developed countries to commit to devoting $100 billion annually by 2020 for the operationalization of the climate change fund.

Meanwhile, Prime Minister Ralph Gonsalves of Saint Vincent and the Grenadines said that the Assembly was “beset by global threats and risks.” 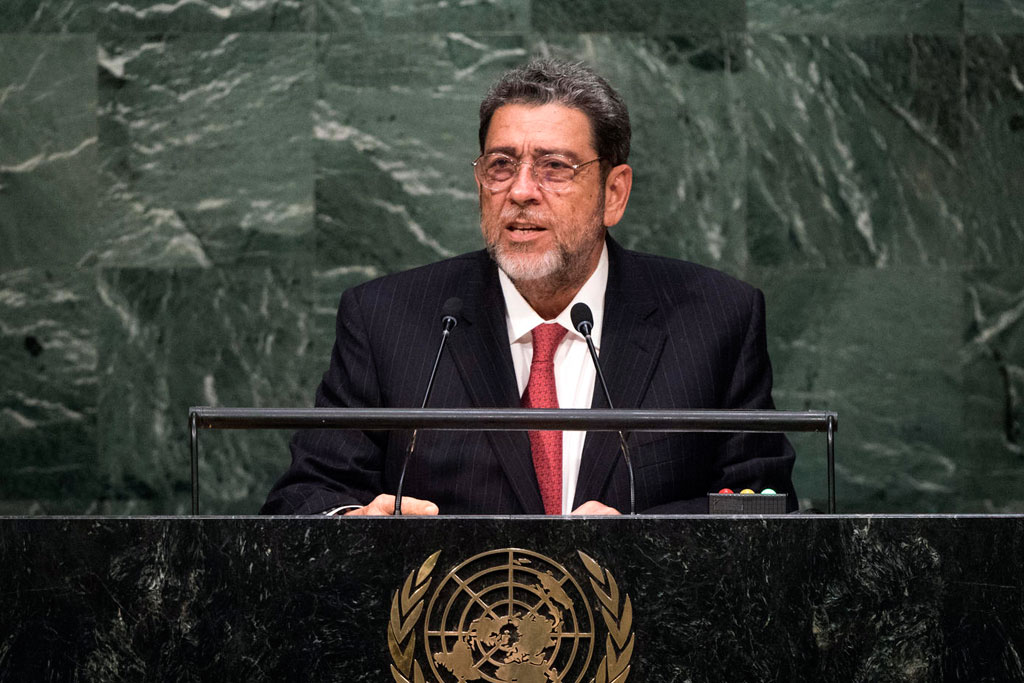 He spoke of the “grave and gathering threat of climate change” and of the “rising and raging seas” attacking the coastline of Saint Vincent and the Grenadines, where, he said, climate volatility threatens lives and livelihoods.Speaking of the recent devastation wrought by tropical storm Erica on the island of Dominica, Mr. Gonsalves noted that nations’ existential struggles in the face of climate change must be addressed through reaching an agreement at the upcoming Paris conference.

Similarly, the Prime Minister of Tonga, Samuela 'Akilisi Pohiva, said his country looked forward to the successful conclusion of negotiations on a climate agreement in Paris at the end of this year. 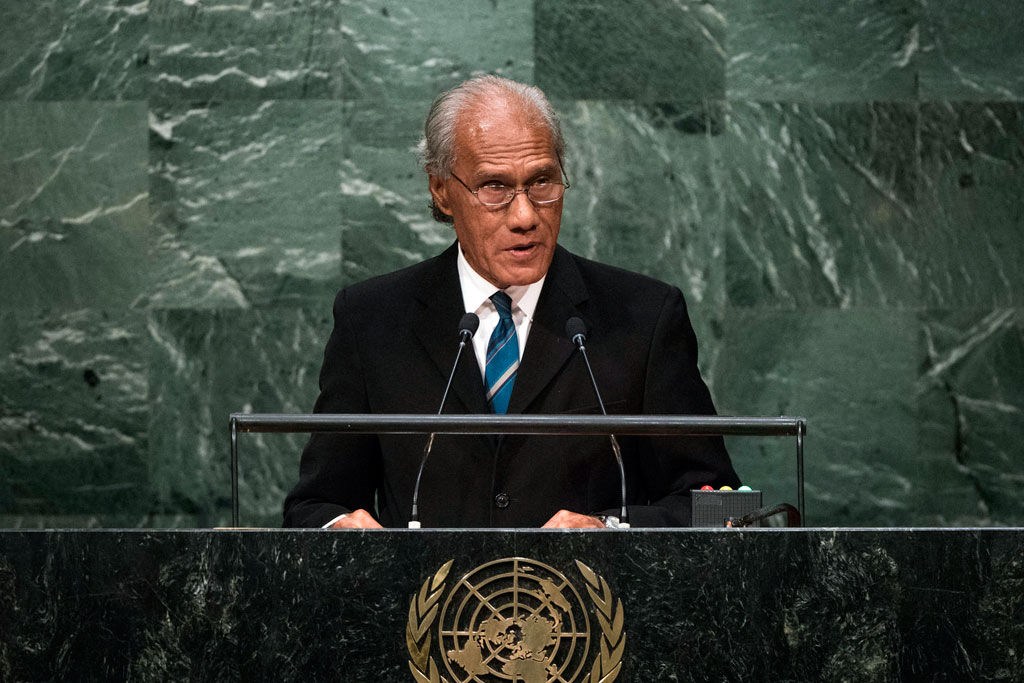 “This agreement must reaffirm the ultimate objective of the [UN Framework Convention on Climate Change] to stabilize greenhouse gas emissions in the atmosphere,” he underscored. “Tonga remains highly vulnerable to natural disasters, which continue to increase in frequency and destructiveness,” he continued. “Climate change continues to pose an irreversible threat to our people, our society, our livelihoods, and our natural environment.”

Secretary General Ban Ki-moon reported today that ahead of an upcoming United Nations climate conference in Paris, world leaders have voiced broad support for reaching a durable agreement that will accelerate investments in clean energy and spur a global, low-carbon transformation well before the end of the century, consistent with a below 2 degrees Celsius pathway.