With Europe confronting its worst refugee crisis since World War II, the continent’s leaders mounted the podium of the United Nations General Assembly today to call for global action to end the conflict in war-torn Syria and elsewhere that has sent hundreds of thousands of people fleeing to their shores.

“The crisis we are talking about has global dimensions and demands a global solution,” European Council President Donald Tusk told world leaders on the second day of the Assembly’s 70th annual General Debate, chiding those who cite European tensions over how to tackle the influx as an example of ill treatment.

“If in Europe we are engaged in animated discussions on relocation quotas, it is because we care. It is because we seek to be as effective and as inclusive as possible. But quotas are just a fraction of what Europe is already doing to help those who flee wars and persecution,” he said.

“By contrast, many countries represented here deal with this problem in a much more simple way; namely by not allowing migrants and refugees to enter their territories at all. This is why suggesting that Europe is an example of poor treatment or indifference towards asylum-seekers is sheer hypocrisy,” he declared.

“Everyone can offer help to the refugees. And those who do not want to, at least shouldn't hide their indifference by criticizing Europe for doing too little.”

Mr. Tusk said Syria’s crisis will not be solved unless a common denominator of interests is found among the regional players. He warned, however, that a peace plan must not just define a new division into spheres of influence but above all must safeguard the interests of millions of Syrians, including those internally displaced those that have fled the country.

The fight against terrorism is important in this context, he added, but stressed that many refugees are fleeing the state terrorism of Syrian President Bashar al-Assad.

“Today the circle of proponents of the idea that Bashar al-Assad should be part of Syria's transition is growing. Yet we cannot forget that millions of people have fled his horrific methods of trying to secure stability in Syria,” he declared.

Mr. Tusk’s message was echoed by national leaders. “Not helping is not an option for us,” Finnish President Sauli Niinisto told the Assembly, stressing that Finland is receiving proportionally a very high number of asylum-seekers. 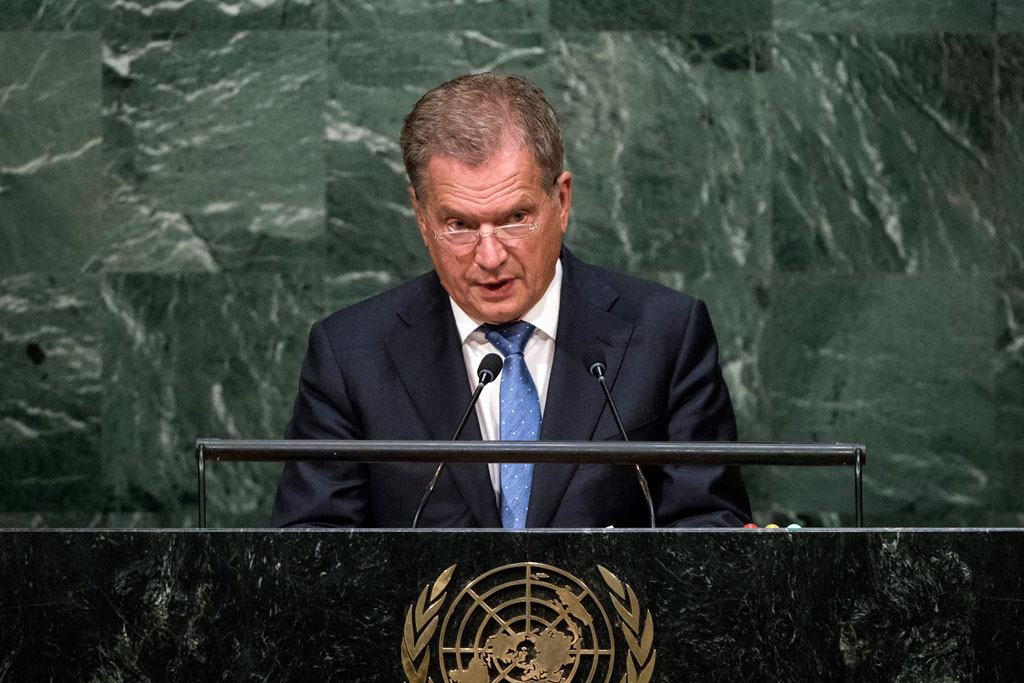 “But we have to find more effective and sustainable ways to help those in need. Solving the conflict in Syria and elsewhere is essential for any lasting solution,” he said, calling the “horrendous terror” of the [Islamic State of Iraq and the Levant] group in Syria and Iraq a direct product of the conflicts there.

“The international community must now show that we do care. Especially the UN Security Council and the countries in the region, must work together on finding a political solution to the crisis in Syria,” he added, reaffirming Finland’s commitment to international coalition to counter the so-called ‘Islamic State.’

Mr. Niinisto also said Russia’s “illegal” annexation of Crimea must not be recognized, announced that Finland would increase its contribution to UN peacekeeping operations at a time of ever more violent conflicts, stressed the need for urgent action at December’s climate change conference in Paris, and suggested that the next UN Secretary-General should be a woman.

Estonian President Toomas Hendrik Ilves stressed the need to deal with the root causes of the migration crisis. “But this truly biblical movement of peoples demands a global response,” he said, noting that the European Union (EU), the main donor, has already mobilized some €4 billion already mobilised to Syrian refugees and internally displaced persons (IDPs). 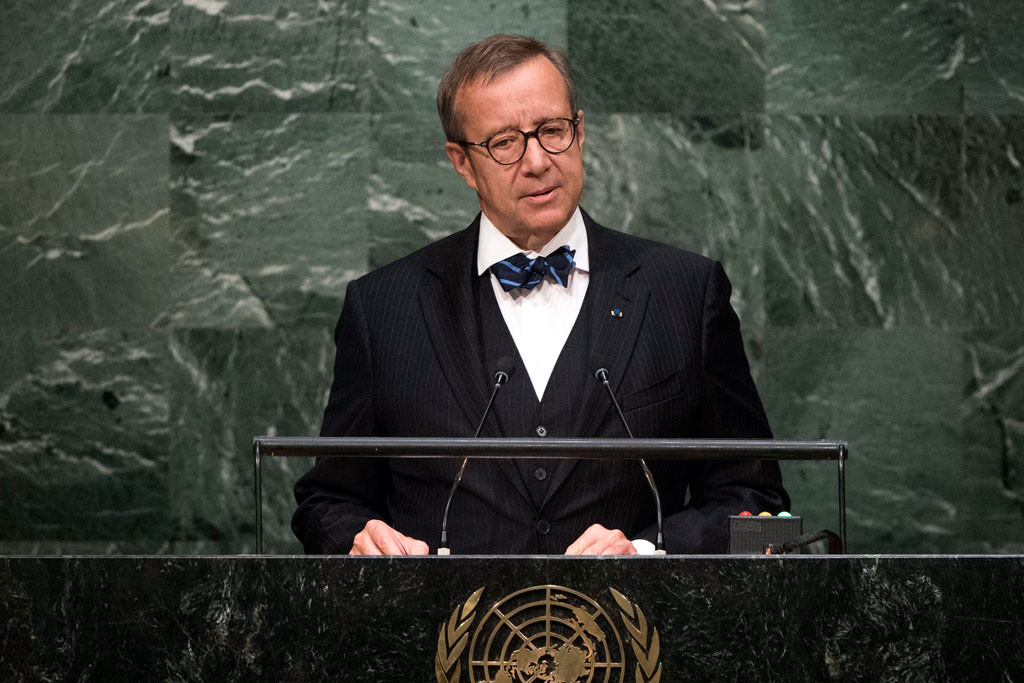 Mr. Ilves deplored Russia’s “illegal” occupation of Crimea and called for an end to the aggression against Ukraine.

He noted that this year is the l0th anniversary of the Responsibility to Protect, under which all UN Member States commit to protecting their people from genocide, war crimes, ethnic cleansing and crimes against humanity.

“The Security Council bears primary responsibility in this regard,” he stressed. “Unfortunately, in most serious situations, the Security Council has failed to act due to the use of the veto. It is disappointing that in cases of Syria and Ukraine the Council debates have brought no result.

“Council members must not vote against actions aimed at preventing and stopping mass atrocity crimes,” he said, calling for the right of veto by the five permanent members – China, France, Russia, the United Kingdom and the United States – to be excluded in cases of genocide, crimes against humanity, war crimes or other atrocities.

Also calling for a global response, Italian Prime Minister Matteo Renzi said Europe was born to tear down walls, not to build them. “This is why Italy is in the front line in rescuing thousands of migrants who are fleeing war and despair,” he declared. 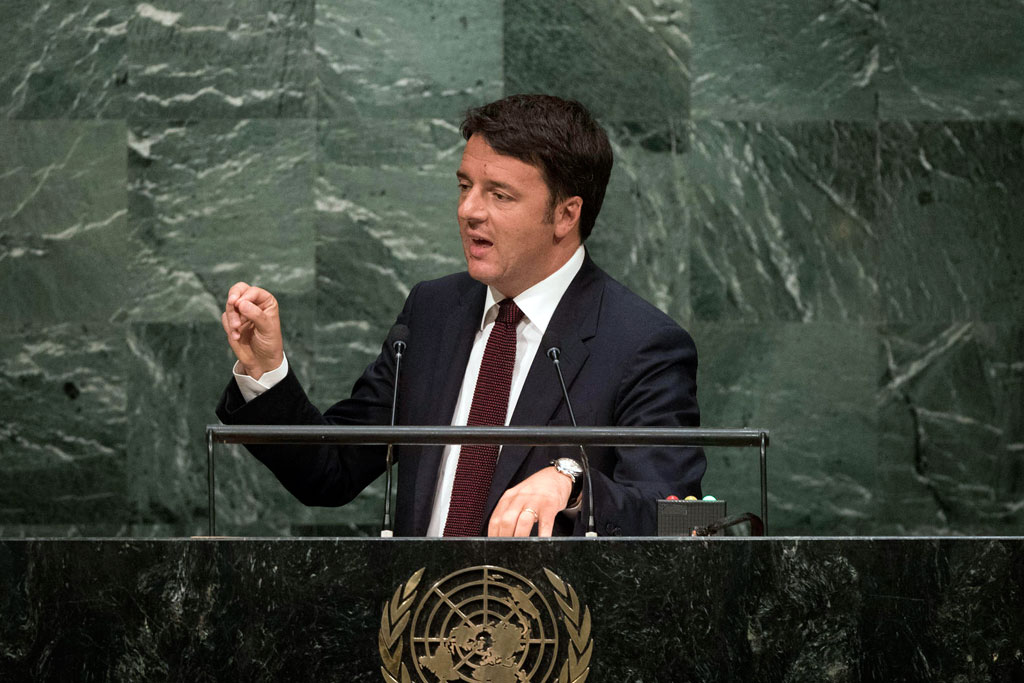 “All of us acknowledge and have touched with our own hands the failure of inertia… more than ever before a very dangerous enemy is at our doors,” he added, referring to the Islamic State. “We have to unite our forces and fight against the threat of terrorism.”

He said Italy was also ready to cooperate with the new Libyan Government and would be ready, if asked, to take a leading role in a mechanism to stabilize the violence-torn North African country.

For his part, Romanian President Klaus Werner Iohannis also called for addressing the full dimensions of the current massive waves of migration. 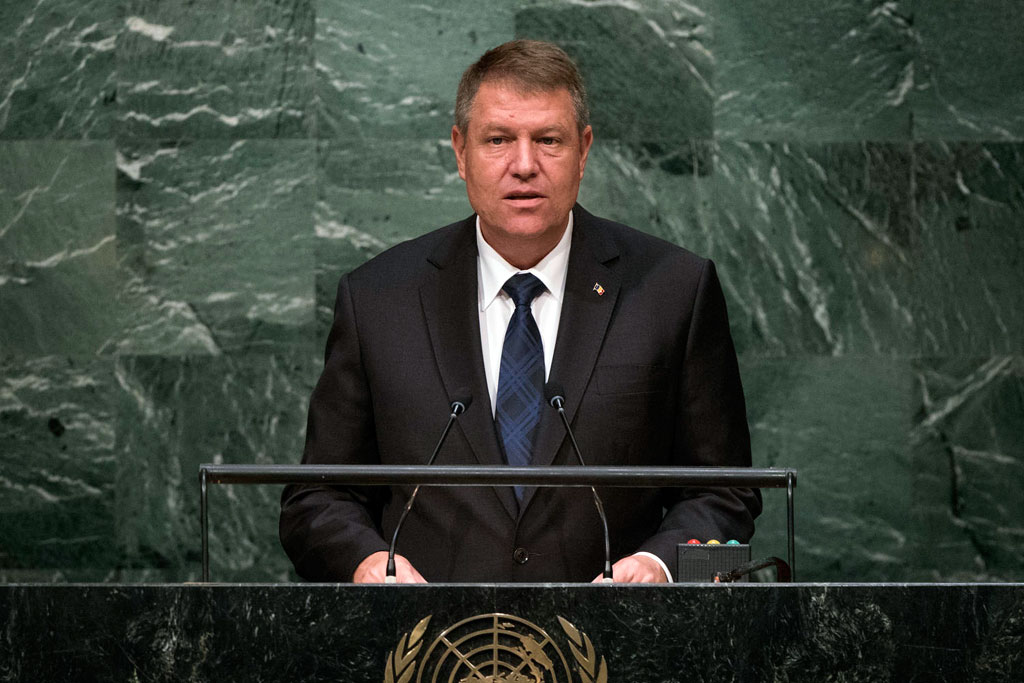 “This phenomenon needs not just responses to the immediate humanitarian needs of the refugees of migration but to the root causes,” he said.

Like his Estonian counterpart he, too, called for the non-use of the veto in the Security Council when dealing with mass atrocities, warning that inaction created the impression that unlawful territorial gains, such as in Ukraine, were tolerated.

The need for restricting the right to veto was also emphasized by Lithuanian President Dalia Grybauskaité, who said this would have been beneficial in Syria to stop the Government’s use of barrel bombs and gross human rights violations. 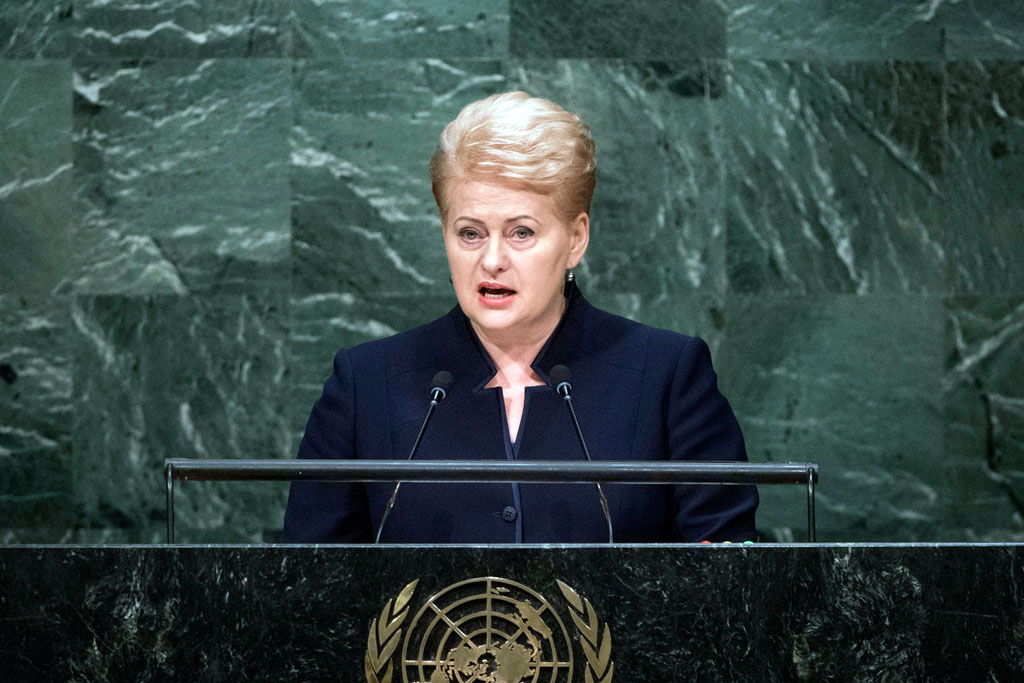 “The Security Council failed to do so and millions of Syrians had to flee,” she declared. “The four vetoes on resolutions on Syria did nothing to solve the situation. As a result today we have the largest humanitarian crisis in the world.”

Turning to Ukraine, Ms. Grybauskaité said the UN Charter has been breached with no consequences as Russia seeks to revise history and redraw borders, with Russian aggression in Crimea and eastern Ukraine striking at the very core of international principles.

“Our collective failure to stand up for the undeniable principles of independence, sovereignty, unity and territorial integrity of Ukraine will have far-reaching repercussions for the international order.

“The occupied territories of Ukraine, Georgia and Moldova are full of red lines that we have drawn ourselves but never acted upon,” she added, stressing that the UN must have the tools to operate in the 21st century.

Czech Republic President Miloš Zeman called for coordinated action under the umbrella of the Security Council to combat terrorism. 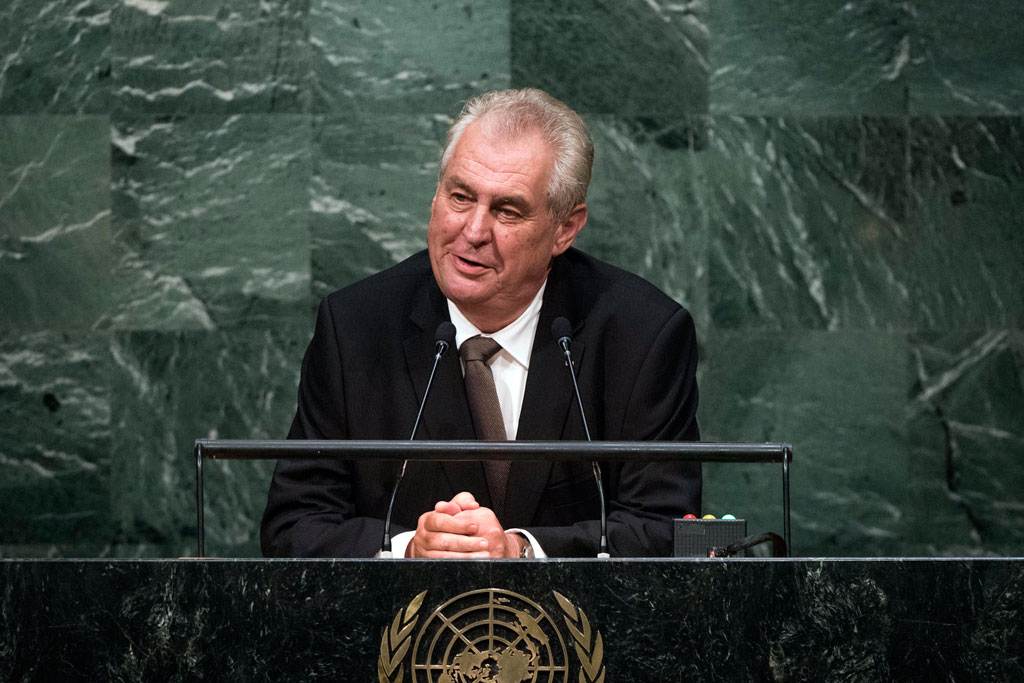 “What we need are small military units equipped by drones, by helicopters, by cooperation of secret services by commandos or, if you wish rangers, the small blue helmets of some sort which would eliminate the leaders of terroristic organizations, the nerve centres of those organizations, and not the occupation of territory.”

He called on Security Council members to introduce such a resolution.

In his remarks, Philip Hammond, Foreign Secretary of the United Kingdom, said the world faces deep challenges from those that would undermine international peace and security. Indeed, conflict and tyranny the North Africa and the Middle East has driven millions of people to abandon their homes, sparking a humanitarian emergency on an unprecedented scale. 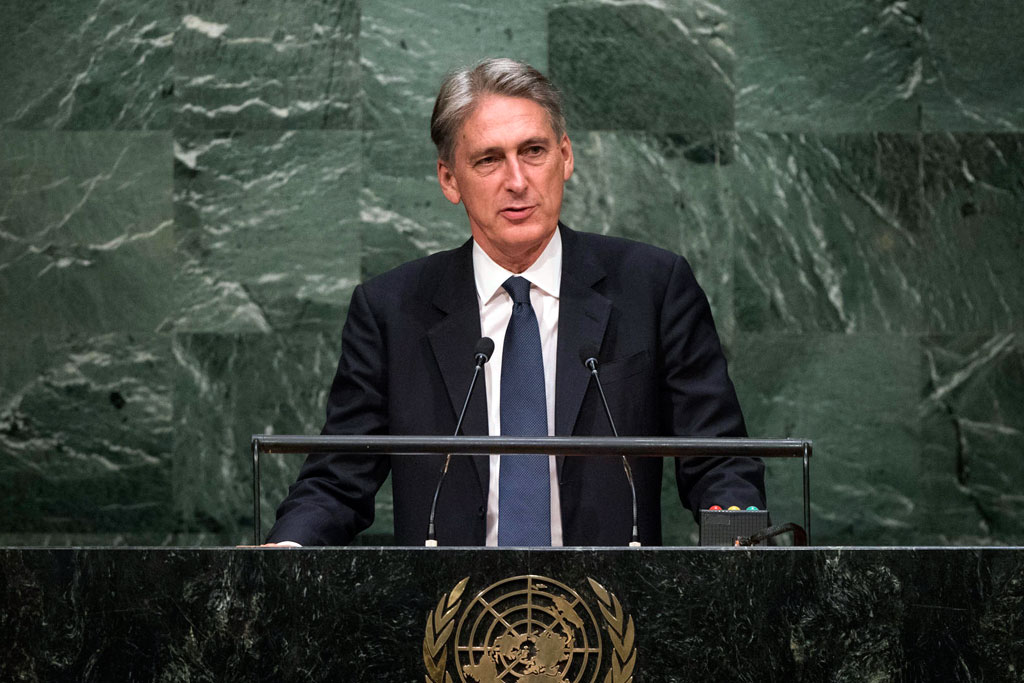 “And many millions more still live under regimes in which they have no say about how they are governed and in which human rights and fundamental freedoms are denied,” he said, adding that the multilateral system is also being undermined by States willing to violate the territorial integrity of others or to breach the most fundamental prohibitions on weapons of mass destruction.

“Alongside these, we face the longer-term threats posed by climate change, pandemics and anti-microbial resistance; threats that we must tackle collectively now if we are not to put the lives of future generations at risk,” said Mr. Hammond, emphasizing however that: “It is in Iraq and Syria…that our collective values and our will to act are being most immediately challenged.

The “twin evils of [Syrian leader] Bashar al-Assad’s murderous regime and the brutality of ISIL” have inflicted suffering on the Syrian people “on an almost unimaginable scale.” He said that the humanitarian consequences, as well as the refugee and migration crisis, were testaments to the dire situation. He urged all countries to ensure that the UN appeals for Syria are fully funded.