Monarchs, Presidents and Prime Ministers will gather by the scores at United Nations Headquarters in New York today for the General Assembly's annual General Debate, with a small island State that symbolizes the combat against climate change – an urgent threat to global sustainability – set to occupy the first seat.

By tradition, each year, the Secretary-General draws lots to select which among the UN's 193 Member States will occupy the first seat in the General Assembly Hall throughout the yearlong session, and this year Ban Ki-moon picked Tuvalu, a low-lying developing State of some 11,000 people in the South Pacific whose very existence is under dire threat from rising seas brought on by human-caused climate change.

Tackling climate change is one of the major objectives of the ambitious 2030 Agenda for Sustainable Development which the Assembly adopted on Friday. Composed of 17 goals and 169 targets, the Agenda is an essential plank in the effort to wipe out poverty, fight inequality and enhance medical and educational access over the next 15 years. Unchecked climate change could undermine all the other goals.

Ahead of this 70th anniversary General Debate, Mr. Ban will present his annual report on the work of the Organization. This year's Assembly President, Mogens Lykketoft of Denmark, will then deliver the keynote opening speech. He will then be followed by Brazilian President Dilma Rousseff, whose country holds the traditional role of first national speaker. She will be followed by United States President Barak Obama as leader of the host nation.

Many of the leaders have already participated in the three-day UN Sustainable Development Summit that launched the 2030 Agenda.

The new Agenda is people-centred, universal, transformative and integrated. It calls for action by all countries for all people over the next 15 years in five areas of critical importance: people, planet, prosperity, peace and partnership. The agenda recognizes that ending poverty must go hand-in-hand with a plan that builds economic growth and addresses a range of social needs, while tackling climate change.

The Summit opened Friday with the film screening, The Earth from Space, followed by musical performances by UN Goodwill Ambassadors Shakira and Angelique Kidjo, as well as a call to action by Nobel Laureate Malala Yousafzai along with youth representatives as torch bearers to a sustainable future. 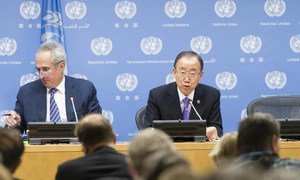