UN Photo/Mark Garten
Secretary-General Ban Ki-moon addresses a press conference on the occasion of the start of the seventieth session of the General Assembly. At left is spokesperson Stéphane Dujarric.
16 September 2015

Mr. Ban made the announcement at a wide-ranging news conference less than 10 days before world leaders gather at UN Headquarters in New York for general debate of the 70th session of the General Assembly at “a time of turmoil and hope.”

“Turmoil – because conflicts have deepened in so many places, and civilians are paying the price,” he said. “Hope – because a historic number of world leaders will gather here to forge solutions and adopt an inspiring new development agenda.”

The UN chief lauded the upcoming adoption of the 2030 Agenda for Sustainable Development, set to take place next Friday, that “embodies the yearnings of people everywhere for lives of dignity on a healthy planet” and which “shows what Member States can achieve when they work together.”

On efforts to combat climate change, he expressed his concern that not enough is being done to keep temperature rise under the 2-degree Celsius threshold and urged world leaders “to raise ambition – and then match ambition with action.”

The Secretary-General, who has more than 100 one-on-one meetings with visiting dignitaries, said that “with political will and resources, we can transform our future and do more to prevent the kinds of crises we see in far too many places.”

On Syria, Mr. Ban said he will meet with the foreign ministers of the permanent members of the UN Security Council – China, France, Russia, the United Kingdom and the United States – to seek an end to a conflict in which “the combatants are defying all norms of humanity.”

In Yemen, where he said aerial attacks are devastating the civilian population, the UN chief urged the Yemeni parties to immediately rejoin the political process under the facilitation of his Special Envoy, Ismail Ould Cheikh Ahmed, saying “there is no military solution to this conflict.”

On the increasing humanitarian needs of civilians bearing the brunt of the mounting crises around the world, Mr. Ban said 100 million people – about one of every 70 people on earth – now need life-saving support but all appeals are chronically under-funded.

Citing the 60 million people displaced by brutal conflicts, breakdowns in basic governance, economic despair and other factors have generated displacements of people not seen since the Second World War, he noted the meeting he will convene on 30 September to tackle this issue.

“Men, women and children fleeing war and persecution deserve real support, including asylum,” he stressed. Advising “those standing in the way of the rights of refugees to stand in their shoes,” the UN chief also urged “all States to shoulder their responsibilities and live up to their legal obligations.”

In response to a question about the treatment of refugees and migrants on the border of Hungary and Serbia, Mr. Ban said he was “shocked” to see how they were treated. “It's not acceptable,” he said.

These are an urgent emphasis on conflict prevention and mediation; steps to improve the speed and agility of UN peacekeeping and political missions; and deeper partnerships with regional organizations, in particular the African Union.

The Secretary-General also said that the future of UN peace operations also depends on concerted action to rid such operations of sexual exploitation and abuse. “It is shameful when UN and other personnel sent to protect people compound the suffering and become part of the problem,” he said.

The annual general debate will begin at UN Headquarters on 28 September. Member States will gather ahead of that, from 25 to 27 September, for the Sustainable Development Summit. 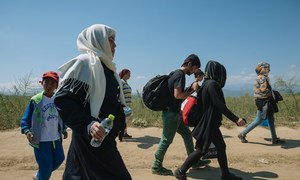 Secretary-General Ban Ki-moon today discussed the refugee and migrant crisis with Prime Minister David Cameron of the United Kingdom, as he continued to confer with European leaders on what has become the biggest influx of people into the continent in decades.