Following a recent upsurge in fighting between the Revolutionary Armed Forces of Colombia (FARC) and the Government, Secretary-General Ban Ki-moon today welcomed the agreement reached by the parties in Havana, Cuba on the issue of victims and commended their commitment to place victims at the center of the peace process.

The FARC have been in talks with the Government for the last 32 months, seeking to end a 51-year conflict that has made almost a quarter of a million victims.

In a statement, Mr. Ban’s spokesperson said the announcements made by the parties represent significant progress towards reaching a final peace agreement and bring Colombia even closer to ending the hemisphere’s longest armed conflict.

“The Secretary-General looks forward to welcoming President Juan Manuel Santos of Colombia at the United Nations in New York and hearing his views about the way forward for the peace process,” the statement noted.

Mr. Ban also commended the role of guarantor countries, Cuba and Norway, as well as of Chile and Venezuela as accompanying nations in assisting this peace process.

“The Secretary-General reiterates the commitment of the United Nations to continue supporting the parties as they advance in their work toward reaching a Peace Agreement, particularly through the work of his Delegate to the sub-commission on End of Conflict,” the statement added.

He also reiterated the willingness of the United Nations system to provide the support required to ensure the successful implementation of the peace agreement in Colombia for the advancement of peace, human rights and development for all its citizens.

Meanwhile, the Secretary-General's Special Representative Zainab Hawa Bangura also commended the agreement, noting that sexual violence and other crimes against humanity, genocide and serious war crimes would not be subject to amnesties or pardons.

Taking to Twitter, Mrs. Bangura, who advocates in the United Nations for eliminating sexual violence in conflict and holding perpetrators to account, said specific mention of sexual violence in the agreement is a "victory" for survivors and activists participating in the Havana talks. 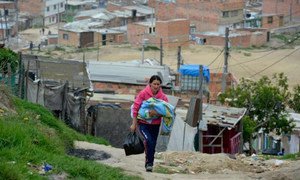 Secretary-General Ban Ki-moon has expressed concern over the current upsurge in fighting in Colombia in a reversal of recent attempts to de-escalate the country’s long-standing armed conflict, the United Nations spokesperson’s office has reported.