A “heinous” attack against a camp for internally displaced persons (IDPs) in Yola, north-eastern Nigeria, where some 32,000 people have found refuge, was strongly condemned today by an independent United Nations human rights expert.

“IDPs are amongst the most vulnerable persons and according to international human rights and humanitarian law they must be protected against any direct and indiscriminate attacks or other acts of violence against them or their camps or settlements,” Chaloka Beyani, the Special Rapporteur on the human rights of IDPs, said in a news release.

On 11 September, at least seven people were killed and 14 others injured, including four officials from the National Emergency Management Agency, after the Malkohi IDP camp in Yola, in Adamawa state, was the target of a suicide bombing.

According to the news release, no party has so far claimed responsibility for the bombing, the first attack of its kind since the escalation of the crisis in northern Nigeria.

The expert stressed that those responsible must be held accountable and brought to justice. While appreciating the Government’s condemnation of the attack, he called for increased security measures where necessary to ensure the protection and human rights of IDPs.

Furthermore, in light of the screening of IDPs by security agencies, Mr. Beyani cautioned that “any security measures must not infringe on IDPs’ human rights, including their freedom of movement and family unity,” while noting that the vast majority of IDPs are “innocent victims” and their camps must retain their civilian character.

The expert also expressed his concern about recent attacks against IDP returnees in the state of Taraba. Over 2.1 million persons have been forced to flee their homes in north-eastern Nigeria since the intensification of Boko Haram’s violent insurgency and the declaration of the State of Emergency in May 2013.

“Food insecurity has been worsening combined with the lack of education, safe drinking water and health services,” Mr. Beyani warned, calling for an increase in humanitarian assistance to IDPs and communities hosting them in northern Nigeria.

He added that humanitarian organizations are doing the best they can under very difficult circumstances, but funding shortfalls and insecurity are preventing them from reaching all those in need. 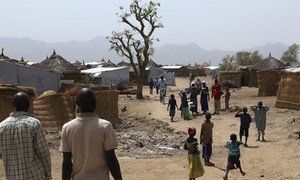 Families on the run often surviving brutal attacks in Nigeria are now threatened with the lack of food, water and deadly epidemics in neighbouring Cameroon, where they have sought refuge, the top United Nations humanitarian official in the region said today.