Families on the run often surviving brutal attacks in Nigeria are now threatened with the lack of food, water and deadly epidemics in neighbouring Cameroon, where they have sought refuge, the top United Nations humanitarian official in the region said today.

"Many fled overnight, leaving all they had behind,” Toby Lanzer, UN Regional Humanitarian Coordinator for the Sahel, said after a week-long visit to Yaoundé, Cameroon, and the Far North region to assess the mounting humanitarian impact of the crisis in neighbouring northeast Nigeria and the Lake Chad Basin.

“They now rely on humanitarian assistance and the scarce resources of host communities that were already on the brink before the crisis,” Mr. Lanzer said.

Grave concerns persist for some 20 million people in the Sahel region of Africa, according to the UN Office for the Coordination of Humanitarian Affairs (OCHA). Recurrent conflict, erratic weather patterns, epidemics and other shocks continue to weaken the resilience of households across a region still suffering chronic levels of food insecurity and malnutrition.

And beyond the chronic threats of food insecurity, malnutrition and epidemics, violent conflict in and around the Sahel region has led to a surge in population displacement.

Cameroon’s Far North region hosts almost 200,000 forced migrants, including 80,000 internally displaced persons and over 57,000 Nigerian refugees who fled the violence and settled either in the Minawao refugee camp or with local communities along borders areas.

“Families on the run often survived brutal attacks and face severe trauma,” said Mr. Lanzer. “As if this was not enough of a burden, we now worry that their lives are threatened by the lack of food and water, malnutrition and deadly epidemics such as cholera and measles.

In the Far North, food insecurity has dramatically spiked in recent months, affecting one in every three people. Insecurity is undermining population movements, daily commercial and agricultural activities, adversely impacting the livelihoods of communities still recovering from a decade of droughts.

“As farmers were forced to flee away from their lands, many will miss the harvest next month. Without timely humanitarian assistance, communities may take years to recover,” he urged.

Funding of Cameroon’s humanitarian appeal covers barely 40 per cent of the needs, threatening the viability of humanitarian response to the Far North over the coming months.

“Food distributions, access to health services and psycho-social care are among our top priorities to save lives and restore the dignity of the displaced,” according to Najat Rochdi, the UN Humanitarian and Resident Coordinator in Cameroon. “A renewed engagement by development actors is also essential if we are to address the root causes of chronic vulnerability and ensure stability of the region in a durable manner.”

♦ Receive daily updates directly in your inbox - Subscribe here to a topic.
♦ Download the UN News app for your iOS or Android devices.
cameroon|nigeria 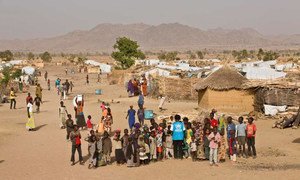 The United Nations refugee chief António Guterres began a two-day visit to Cameroon today to see the impact of the displacement crises in neighbouring Nigeria and Central African Republic (CAR), which have sent over hundreds of thousands fleeing for safety.