We Care Solar, which provides renewable energy at low cost with a medical device that prevents maternal and child complications during labour in areas without electricity, was announced today as the winner of a $1 million grant by the United Nations Department of Economic and Social Affairs (DESA).

The “Powering the Future We Want” grant aims to fund capacity development activities in energy for sustainable development. It is awarded to an individual, institution or partnership based on past and current achievements.

“We in this room know how to solve darkness – with light,” Dr. Laura Stachel, co-founder of We Care Solar, said as she accepted the award at a ceremony held at UN Headquarters. We Care Solar’s goal, she said, was to “put that solution in a box and get it to every healthcare facility in the world.”

“Women have the right to safe childbirth,” she said, adding that “every health centre is entitled to life-saving electricity.”

The “Powering the Future We Want” grant initiative is carried out by DESA in collaboration with the China Energy Fund Committee (CEFC), a Hong Kong-based non-governmental organization in consultative status with the UN Economic and Social Council (ECOSOC).

“Energy is a key priority for the UN,” Secretary-General Ban Ki-moon said at the ceremony, adding that it underpinned all efforts to achieve development objectives.

“I know what it is like to not have access to modern energy,” he said. “When I was growing up in Korea, I studied by candle or kerosene lamp.”

Mr. Ban noted that one third of the world’s population lacks access to electricity, and four million die each year from the effects of indoor air pollution.

General Assembly President Sam Kutesa thanked the finalists for their hard work and innovation in seeking practical solutions in sustainable energy, and said he was “impressed by a number of proposals and the inspired way in which applicants addressed sustainability issues.”

Under-Secretary-General for Economic and Social Affairs Wu Hongbo said that the finalists all deserved the UN’s deep gratitude. “You have demonstrated through your actions on the ground how you are contributing to the sustainable energy commitment,” he said.

“Access to energy should be a basic universal right of every man and woman,” said the Secretary-General of the CEFC, Patrick Ho, adding that energy security and energy sustainability should transcend private interests. 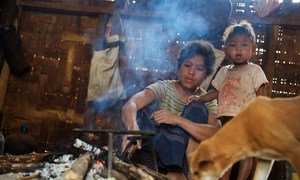 More than a billion people – one in five globally – lack electricity to light their homes or conduct business, according to a recent World Bank report. Nearly three billion rely on dangerous, polluting fuels – such as wood, charcoal and animal dung – to cook and heat their homes.