UNSMIL
Special Representative for Libya and Head of the UN Support Mission in the country, known as UNSMIL, Bernardino León (left) holding talks in Geneva on a political agreement.
4 September 2015

The United Nations envoy facilitating efforts to restore peace in Libya said today that real progress was being made as the participants wrapped-up the latest round of the political dialogue process, which has been taking place in Geneva.

Speaking to journalists after the latest discussions, the Special Representative of the Secretary-General for Libya and Head of the UN Support Mission in the North African country, known as UNSMIL, Bernardino León, said that the day’s talks had been fruitful.

“We have clarified a number of points with the different delegations, and particularly with the GNC [General National Congress] delegation,” he said. “And I think we have clarified all these points. We still have a couple of issues that the GNC will have to consult with their colleagues and that we also will discuss inside the team in order to make proposals.”

The GNC, said Mr. León, was still very much a part of the political dialogue.

In response to a question from reporters, he clarified that he had received the names from the House of Representatives but not yet from the GNC. He said that he very much hoped that the GNC delegation will join the talks next week, together with others who had proposed names.

Mr. León expressed optimism that “we really have a chance to reach a final agreement in the coming days and we cannot afford – Libya cannot afford – to miss this opportunity.”

He added that there was the possibility to reach an agreement and have it endorsed and signed by 20 September. 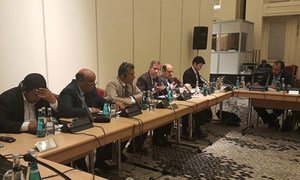 “Tangible” results have been achieved for a political deal in Libya, but concrete solutions to the conflict will only be reached when all parties agree on a final draft, the United Nations envoy facilitating efforts to restore peace in the North African country said today.