UNICEF Ukraine/Pavel Zmey
A girl waits with her mother to get hygienic supplies after leaving their home near Donetsk airport, Ukraine, to escape shelling.
30 August 2015

Sounding the alarm on behalf of relief agencies working to meet ongoing needs and jump-start critical preparations for winter in strife-riven eastern Ukraine, the United Nations humanitarian wing has reported that aid organizations are facing major challenges in getting access to the most vulnerable of an estimated 5 million people affected by the conflict that began in the region in April 2014.

According to the latest monthly update from the UN Office for Coordination of Humanitarian Affairs (OCHA) access challenges vary from security concerns, bureaucratic impediments, and logistical and legal constraints. An estimated 2 million people living in areas along the contact line between Government forces and armed groups are the most vulnerable and the highest priority group in terms of aid operations.

OCHA explains that their plight has been compounded by their inability to flee to safety, particularly across the contact line (from non-Government controlled- to Government-controlled areas) due to complicated procedures on population movements in the area. This has been further aggravated by the lack of social services, disruption of trade, lack of access to pensions and other social-benefit payments, and lack of functioning banking systems in non-Government-controlled areas.

At the same time, people living in Government-controlled areas have been similarly affected and cannot access basic services. Most of the 2 million people have received limited or no assistance from humanitarian agencies, as aid organizations have been unable to reach these people due to insecurity and bureaucratic hurdles.

Humanitarian agencies are also concerned about the protracted displacement of 1.4 million people in [Government-controlled-areas]. About 60 per cent of the registered IDPs [internally displaced persons] are elderly people and about 13 per cent are children, says OCHA, explaining that meeting their needs requires interventions by humanitarian and recovery/development actors in the immediate and longer term.

Intense discussions are under way at various levels to resolve the issue and find practical solutions, focusing on the humanitarian imperative of providing assistance to the people who need it most. OCHA also notes that positive steps have been undertaken to engage with the Government of Ukraine on facilitating access to vulnerable people, and on bringing various laws and by-laws and the temporary order on population movements and movement of humanitarian cargo and personnel in line with the laws of Ukraine and international humanitarian principles.

Yet aid agencies remain concerned, noting the critical delay of winterization efforts caused by suspension of aid convoys. They are extremely concerned, says OCHA, that the “window of opportunity to be well prepared for the winter already closing.” If access continues to be restricted, aid agencies will be unable to transport, store and ensure sufficient supplies of critical non-food and shelter items to help thousands of affected people.

The agencies are also concerned that due to ongoing hostilities about 1.3 million people are at risk of losing access to safe drinking water.

Finally, OCHA underscored that the 2015 Humanitarian Response Plan for Ukraine remains underfunded, according to the Financial Tracking Service (FTS). By the end of August, donors disbursed and pledged about $114 million, which is equivalent to 37 per cent of the $316 million required. This includes $104.9 million (33 per cent) disbursed and another $9.2 million pledged (3 per cent). The shortfall is about $200 million. 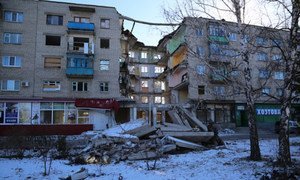 Alarmed by escalation of conflict in Ukraine, Ban calls on parties to resume dialogue

Seriously alarmed by the recent escalation of violence in eastern Ukraine, which has reportedly resulted in the death of civilians on both sides of the contact line, United Nations Secretary-General Ban Ki-moon today called all parties to end hostilities and resume talks.