With the number of migrants fleeing to Europe the violence in their countries of origin continuing to increase, the United Nations High Commissioner for Refugees, António Guterres, today urged the European Union to speed up the formulation of an adequate collective response to this unprecedented crisis.

“Since the beginning of the year, 293,000 migrants and refugees tried to reach Europe via the Mediterranean Sea and 2,440 of them died during the crossing,” said Mr. Guterres during a press conference in Geneva.

Joined by the French Minister of Internal Affairs, Bernard Cazeneuve, who was on a visit to the Swiss city, Mr. Guterres called on European countries not to deal individually with the migration crisis.

“Let’s be frank: 293,000 is a huge number for countries like the Former Yugoslav Republic of Macedonia or Serbia, or even Hungary or Greece; if we also think of the capacity of Germany, which today has most Syrian refugees,” he acknowledged, before adding that the same figure, with in mind the size of the whole European continent and its 508 million inhabitants, is in fact relatively low.

It is even lower, considering the efforts provided by neighbouring countries of Syria, like Turkey, Jordan, Iraq, Egypt and Lebanon in particular, a country whose a third of the population is now made up of Palestinian and Syrian refugees.

“It is clear that Europe has the capacities and the size needed to meet the challenges, assuming that it shows unity and jointly assume this responsibility,” concluded Mr. Guterres.

The High Commissioner's press conference followed incidents on August 21 and 22, during which thousands of migrants prevented to enter the Former Yugoslav Republic of Macedonia following the decision of the authorities to close the country's border with Greece had attempted to force the passage.

The migrants, coming mostly from Syria, had initially reached Greece from Turkey at sea, prior to crossing the Former Yugoslav Republic of Macedonia to Serbia and Western Europe.

“Taking into account all the human tragedies that these people have suffered, it only makes sense that we must act; we must act quickly; and must act effectively,” advocated the High Commissioner, citing the chaos of the past days at the border between Greece and the Former Yugoslav Republic of Macedonia.

Envisioning a more inclusive and responsible migration policy at the European level, Mr. Guterres emphasized the need to increase resources allocated to development cooperation, as well as humanitarian assistance, in particular to address root causes.

“I remind you that the support program to Syrian refugees is only funded only up to 41 per cent overall and up to 21 per cent in Turkey, which is also the country where from the most dramatic displacements have been recorded in eastern Mediterranean,” he said to journalists.

The High Commissioner also called to accelerate implementation of the decisions taken by the European Council to improve reception and registration of refugees, but also relocation and resettlement.

The latter, he observed, “today would likely require much higher figures than those that have been proposed so far.” 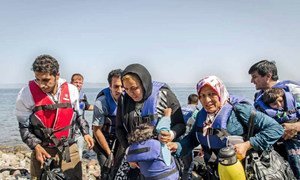 The European Union should establish a human rights-based, coherent and comprehensive migration policy which makes mobility its central asset, a United Nations expert today advocated, assuring is the only way in which the EU can reclaim its border, effectively combat smuggling and empower migrants.