The United Nations relief agency dealing with Palestinian refugees has declared the school year open will on time today for the 500,000 boys and girls in the increasingly unstable Middle East, where multiple crises and a major funding shortage nearly forced the delayed of the opening of 685 schools in the region.

Secretary-General Ban Ki-moon said he is “greatly relieved” that the UN Relief and Works Agency for Palestine Refugees in the Near East (UNRWA) and stressed that education is a right, “and that rights delayed are rights denied.”

“This achievement cannot be underestimated at a time of rising extremism in one of the world’s most unstable regions,” said the UN chief, who has personally been involved in raising the issue of UNRWA funding at the highest political levels.

Declaring the school year open for the 2015-2016 academic year, UNRWA Commissioner-General Pierre Krähenbühl said Palestinian students will return to school according to plan in Palestine on 24 August, in Jordan on 1 September, in Lebanon on 7 September and in Syria on 13 September.

“Education is a fundamental right for children everywhere in the world, and it should never have come to the point where the UNRWA school year risked being delayed because of a funding shortfall for our core budget,” Mr. Krähenbühl said. “But it almost did.”

“For this reason we fought very hard to create a revival of solidarity for Palestine refugees and a renewed understanding of the importance of respecting their rights and addressing their needs adequately and predictably,” he said.

“I have taken this decision first and foremost because of how central education is to the identity and dignity of Palestine refugees and of the 500,000 boys and girls whose future depends on learning and developing skills in our 685 schools,” the agency chief said.

Mr. Krähenbühl noted that for months UNRWA has been drawing the attention of the international community to the risks of neglecting the fate and plight of Palestine refugees in an increasingly unstable Middle East.

“Faced with the multiplicity of crises in the region, many were on the verge of purely and simply overlooking or forgetting the humiliation and despair endured for decades by Palestine refugees,” he said.

He expressed his “profound appreciation” to Saudi Arabia, Kuwait and the United Arab Emirates “whose remarkable combined contributions cover almost half of the 2015 deficit,” and to the United States, Switzerland, the United Kingdom, Norway, Sweden and Slovakia, “who have together contributed generously to help address the funding shortfall.”

“Now we turn our energy and focus to ensure that we never again reach the stage where core UNRWA services are at risk,” Mr. Krähenbühl said. “It is a matter of dignity and respect for Palestine refugees and their children.”

Secretary-General Ban also underscored that “we must do all we can to protect UNWRA’s mandated core services until such times as the Palestine refugees have their plight resolved in the context of a just and durable solution, based on international law and UN resolutions.”

UNRWA is funded almost entirely by voluntary contributions, and financial support has not kept pace with an increased demand for services caused by growing numbers of registered refugees, deepening poverty and conflict. 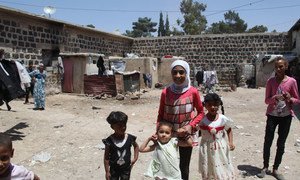