UN Photo/Loey Felipe
Under-Secretary-General for Political Affairs, Jeffrey Feltman, briefs the Security Council at its meeting on the situation in the Middle East, including the Palestinian question.

19 August 2015
The top United Nations political official today warned the Middle East has recently witnessed “unconscionable” hate crimes, “reprehensible” retaliatory violence, provocations at Jerusalem’s holy sites, and a worrying increase in rockets launched from Gaza towards Israel, as he urged all sides to work together to reduce tensions and prevent extremist attacks.

“I address you at a time when the risk of escalation in Israel and Palestine is palpable,” said UN Under-Secretary-General for Political Affairs, Jeffrey Feltman, in his briefing to the 15-member Security Council on the situation in the Middle East.

Saying that “in such a contentious environment, restoring confidence, before a return to realistic negotiations, is a must,” Mr. Feldman warned that while the goal of resolving the Israeli-Palestinian conflict is clear, more than “20 years of failed negotiations have bred mistrust and, worse, the slow and painful withering of hope.”

“What is needed now is a comprehensive approach on three levels – on the ground, in the region, and with the international community – to alter fundamentally the current negative dynamics and begin to shape a clear and positive pathway towards peace,” he said.

The top political official reiterated that in Syria, hostilities must end and the parties must show genuine commitment to resolving the conflict through an irreversible political transition.

And on Lebanon, Mr. Feltman called once more on the country’s leaders to act urgently and responsibly by filling the presidential vacuum without further delay.

“The past month has witnessed unconscionable crimes of hatred by extremist elements, reprehensible retaliatory violence, provocations at Jerusalem's holy sites, and a worrying increase in rockets launched from Gaza towards Israel,” he told the Council.

The recurrent violent incidents and radicalization in the occupied West Bank, including East Jerusalem and Gaza threaten to further destabilize an already tense environment, which he said share a common thread that are “the inevitable product of the failure to make the tough choices necessary to resolve this conflict.”

“We can no longer accept this reality,” Mr. Feldman said. “It is time to reverse the perilous tide that we are now facing and restore, to Israelis and Palestinians alike, the hope that is in danger of being stifled by those promoting their hate driven agendas.”

Against this backdrop, the UN official noted that UN Secretary-General Ban Ki-moon was relieved by the announcement today by the UN agency responsible for Palestinian refugees in the Middle East that UN-run schools will open in time for some 500,000 boys and girls despite a funding shortfall. 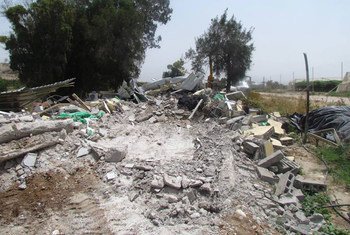 After new displacements, UN officials call for an immediate halt to demolitions in the West Bank

18 August 2015
Senior United Nations officials are calling today for an immediate freeze on demolitions in the West Bank, after dozens of structures were demolished yesterday by Israeli authorities in Palestinian Bedouin refugee communities, near East Jerusalem.