Indigenous children walk home from school in the district of Huallanca, Peru. Classes are taught in Spanish, and students who speak only their native Quechua have difficulty understanding their lessons, resulting in high drop-out rates, says the UN Children’s Fund. UNICEF/NYHQ2011-1606/LeMoyne
10 August 2015

Indigenous peoples must not be left out of the global community’s unfolding sustainable development agenda, United Nations Secretary-General Ban Ki-moon affirmed today as he marked the 2015 edition of the International Day of the World’s Indigenous Peoples with a focus on their lagging access to health care services around the world.

“They count among the world’s most vulnerable and marginalized people. Yet their history, traditions, languages and knowledge are part of the very bedrock of human heritage,” the Secretary-General declared in remarks delivered at an event held at a special UN Headquarters in New York. The event was also expected to hear remarks from Wu Hongbo, Under-Secretary-General for Economic and Social Affairs, and Megan Davis, Chair of the UN Permanent Forum on Indigenous Issues.

“Indigenous peoples can teach the world about sustainable lifestyles and living in harmony with nature,” he added.

The International Day of the World's Indigenous Peoples is commemorated annually on 9 August in recognition of the first meeting of the UN Working Group on Indigenous Populations, held in Geneva in 1982.

This year, the Day’s theme focuses the spotlight on promoting the health and well-being of the world’s indigenous peoples through the 2030 Sustainable Development Agenda, which will be launched in September. The new agenda expands on the success of the Millennium Development Goals (MDGs), which had a target date of 2015, and contains 17 sustainable development goals.

According to the UN, there are an estimated 370 million indigenous people in some 90 countries around the world who constitute 15 per cent of the world's poor and about one third of the world's 900 million extremely poor rural people. Practicing unique traditions, they retain social, cultural, economic and political characteristics that are distinct from those of the dominant societies in which they live.

At the same time, the unique placement of indigenous peoples in society puts them at a disadvantage when seeking access to healthcare while also rendering them more susceptible to specific forms of illness.

In Australia, he warned, many Aboriginal communities have a diabetes rate six times higher than the general population. Meanwhile, in Rwanda, Twa households remain seven times more likely to have poor sanitation and twice as likely to lack safe drinking water. Similarly, in Viet Nam, more than 60 per cent of childbirths among ethnic minorities take place without prenatal care while for the majority population, the figure hovers closer to 30 per cent.

“These statistics are unacceptable,” concluded Mr. Ban. “They must be urgently addressed as part of the 2030 Agenda for Sustainable Development. As we launch the 2030 Agenda with its 17 sustainable development goals, in September, we must ensure that the targets are met for all.”

In her remarks, Ms. Davis said the active and ongoing involvement of indigenous peoples in the development, implementation, and management and monitoring of policies, services and programs affecting the well-being of their communities is essential.

“Only by acknowledging the interrelationship between health and the social determinants of health, such as poverty, illiteracy, marginalization, the impact of extractive industries, environmental degradation, and the lack of self-determination, will any new human development goals be truly achievable amongst indigenous peoples,” she said.

The current MDGs have, Ms. Davis continued, failed to identify the relationship (or access) to customary land as an indicator of well-being. Similarly, mental health issues such as depression, substance abuse and suicide will not be completely addressed so long as the harms of colonization and the status of indigenous peoples are not acknowledged.

“Thus, on the eve of the adoption of a new development agenda, new indicators of indigenous peoples' health and well-being must be defined in consultation with indigenous peoples. Similarly, States should seriously engage in the disaggregation of data in order to better inform the effectiveness of their health policies and plans for indigenous peoples,” she said. 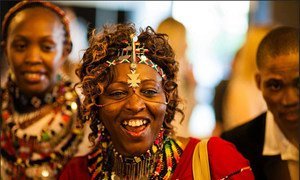 On International Day, Ban says indigenous peoples can be 'powerful agents of progress'

Marking the International Day of the World's Indigenous Peoples today, United Nations Secretary-General Ban Ki-moon said indigenous peoples have a central interest in development and can act as “powerful agents of progress.”