UNICEF/Christine Nesbitt
In Maderia, Ethiopia, health extension worker Elsebeth Aklilu takes a break from counselling women and their children on best nutrition practices, to breastfeed her own 10-month-old son.
3 August 2015

United Nations officials are marking the annual World Breastfeeding Week by highlighting the vital importance of a practice that gives children the healthiest start in life and the need to strengthen policies to promote nursing with stronger workplace policies.

United Nations officials are marking the annual World Breastfeeding Week by highlighting the vital importance of a practice that gives children the healthiest start in life and the need to strengthen policies to promote nursing with stronger workplace policies.

The theme for this year’s observance, held from 1 to 7 August, is “Women and work – Let’s make it work,” which emphasizes the need for better support systems and policies to enable working mothers to breastfeed.

“We know that breastfeeding helps children to survive and thrive – enabling infants to withstand infections, providing critical nutrients for the early development of their brains and bodies, and strengthening the bond between mothers and their babies. And the benefits of breastfeeding last a lifetime,” said the heads of the UN Children’s Fund (UNICEF), Anthony Lake, and the World Health Organization (WHO), Margaret Chan, in a joint statement.

The statement points out that a recent Lancet study found that infants who were breastfed for at least one year went on to stay in school longer, score higher on intelligence tests and earn more as adults than those who were breastfed for only a month. Despite this growing evidence, only 38 per cent of infants around the world today are breastfed exclusively for even the recommended first six months of life. 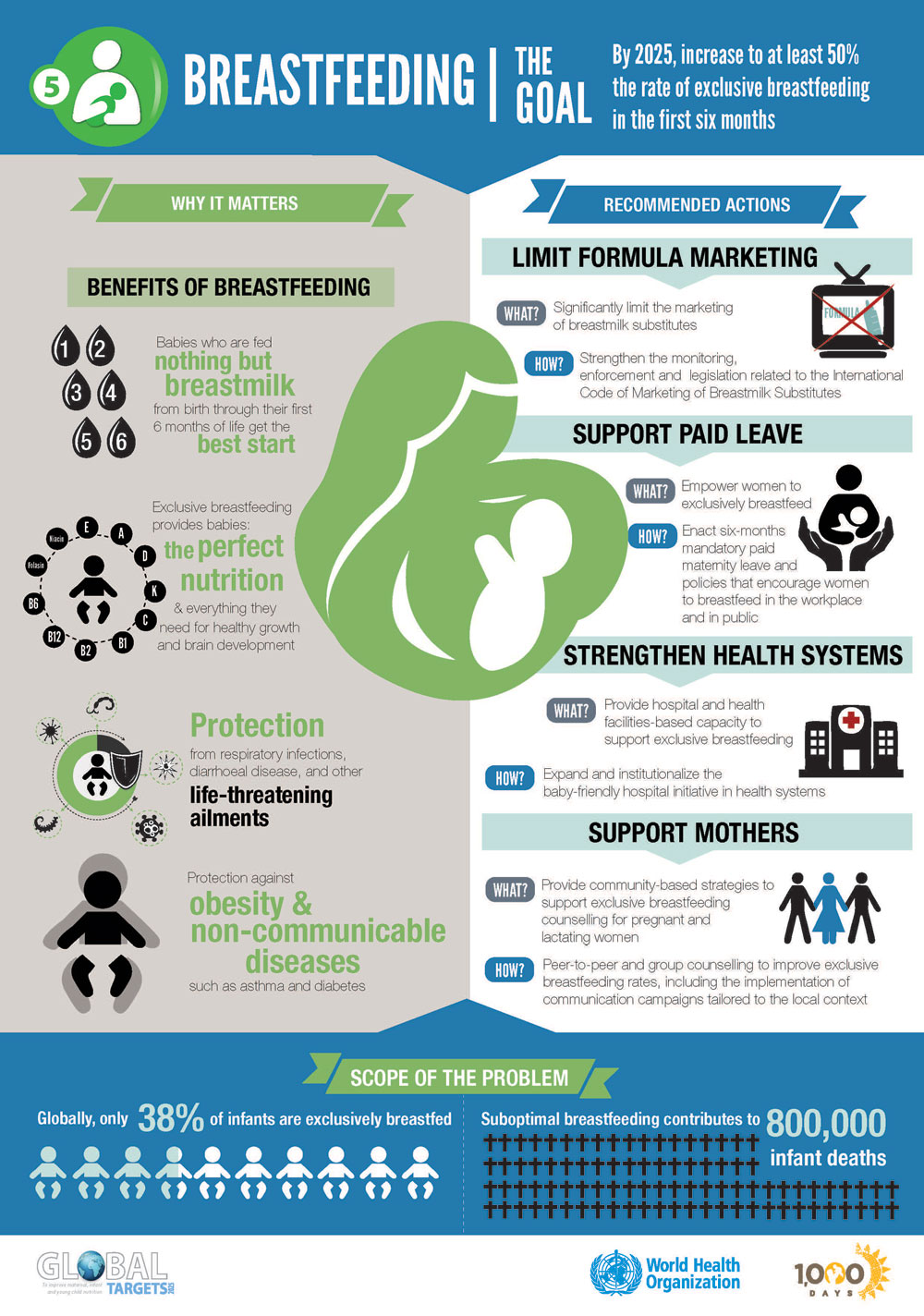 What law makers can do 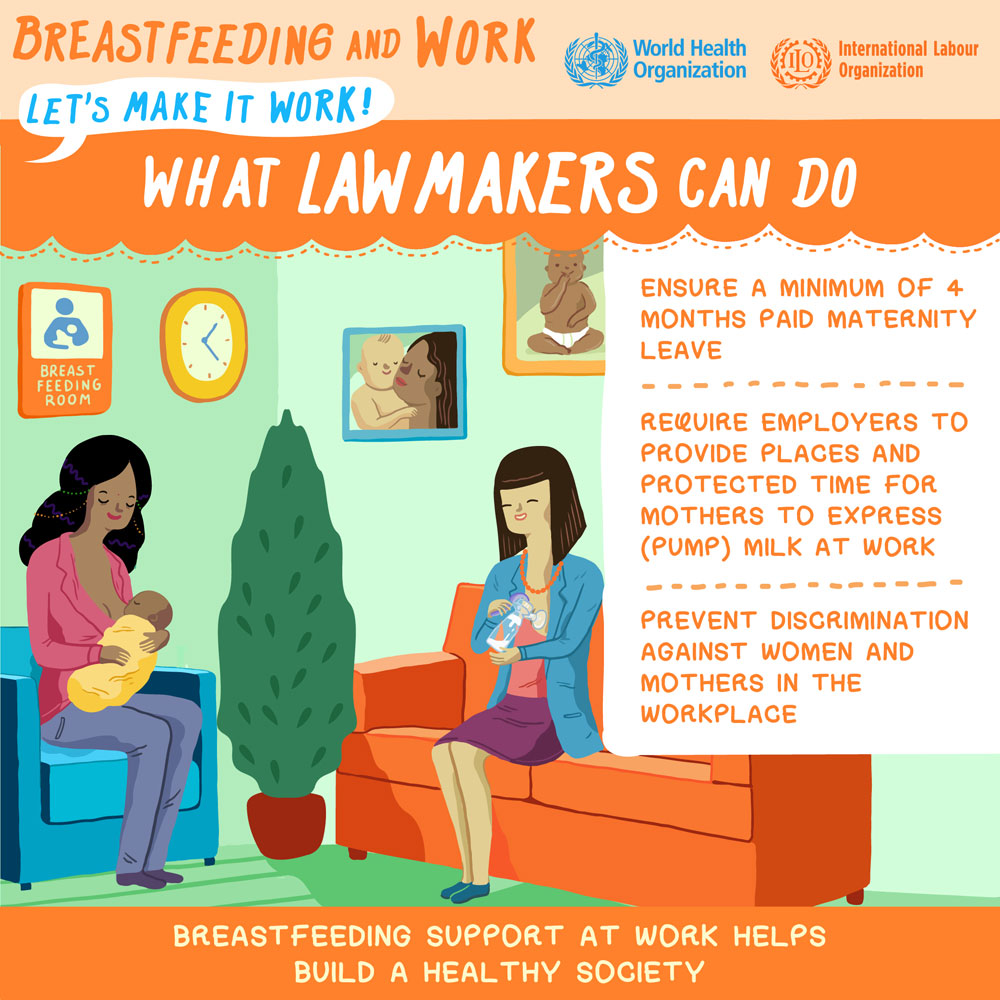 What employers can do 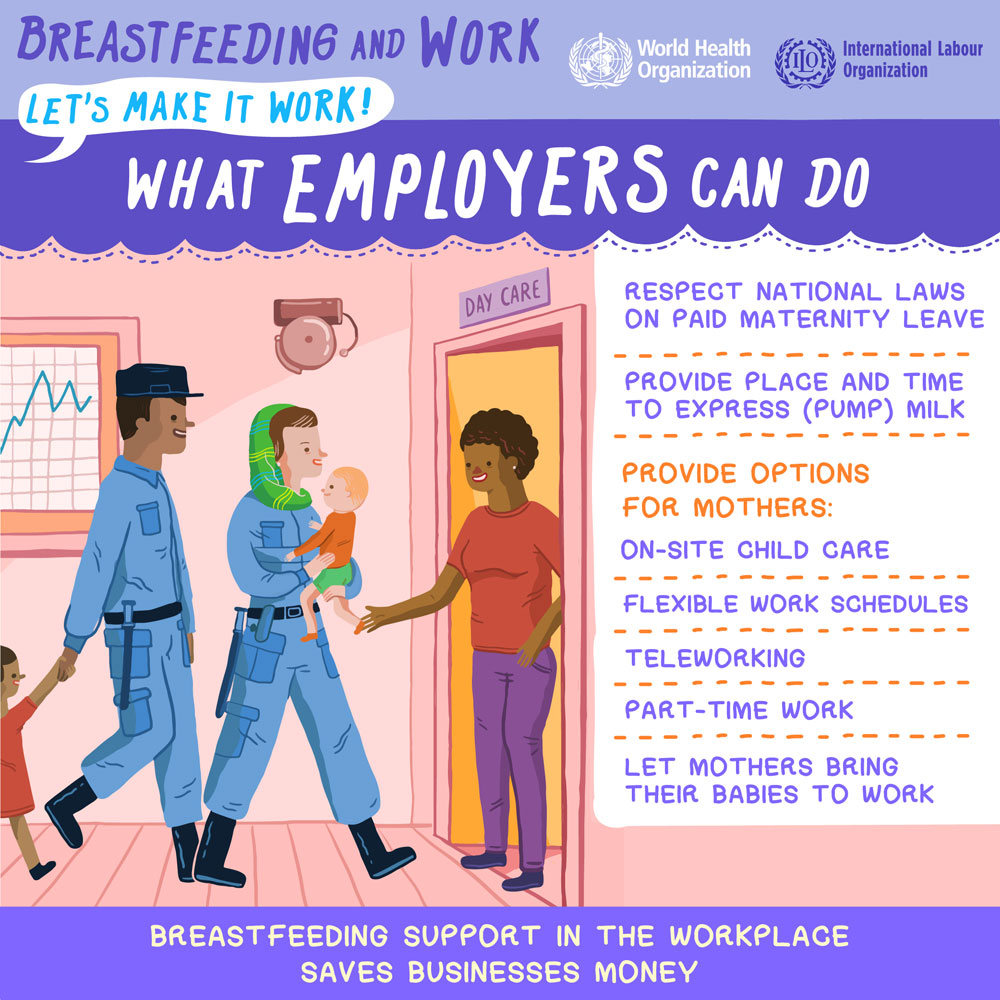 What trade unions can do 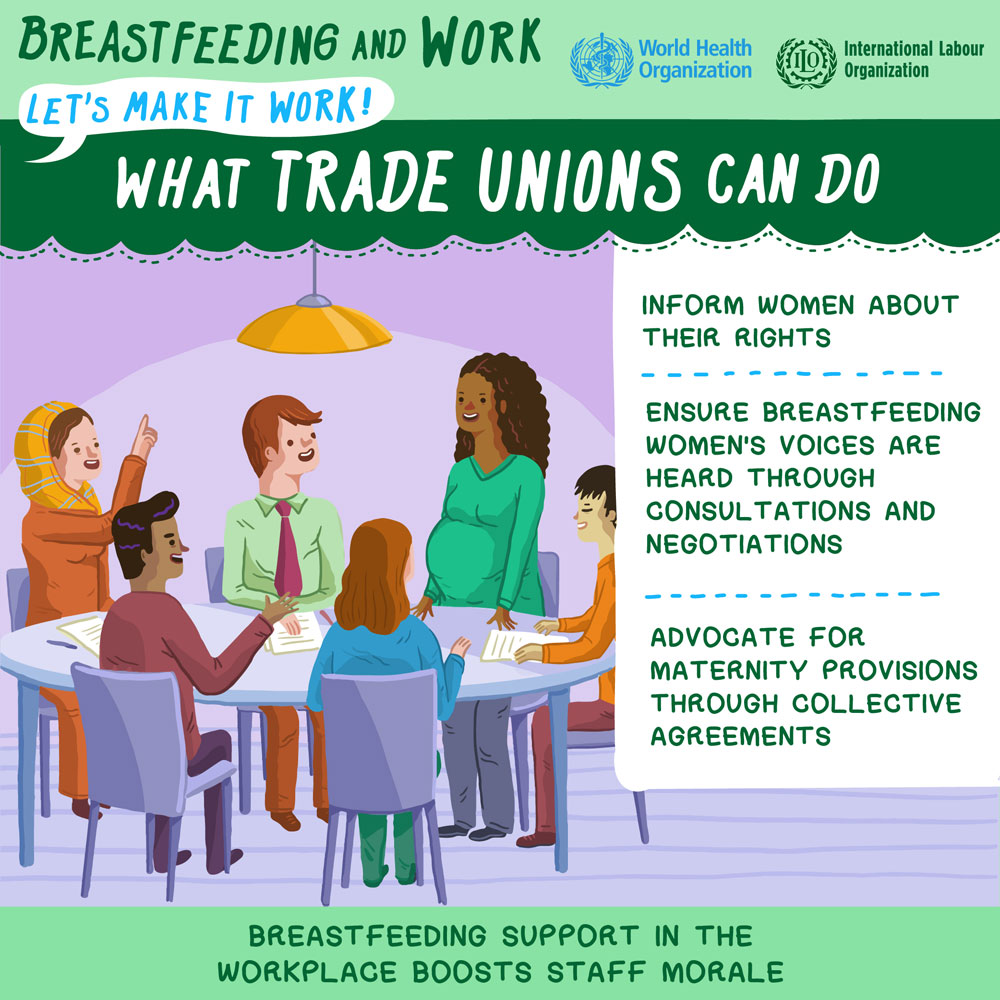 What co-workers can do 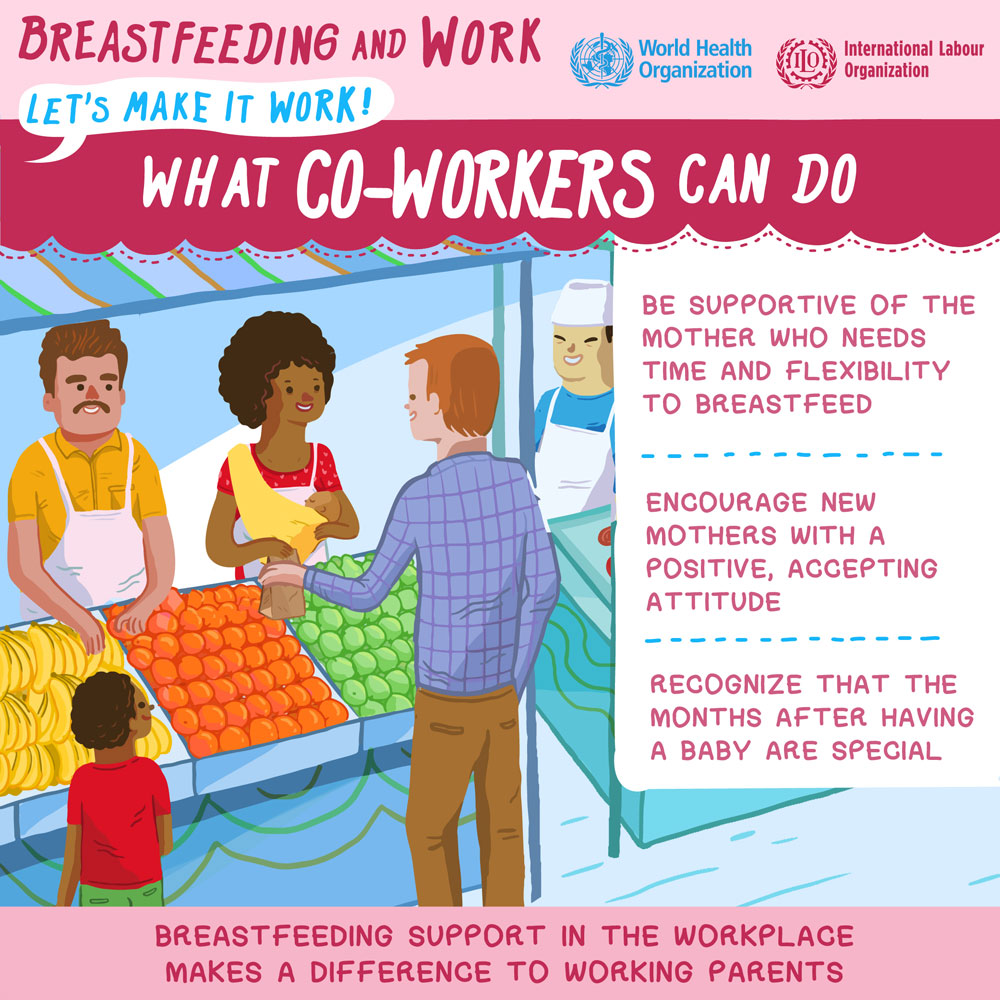 “To achieve this ambitious and very important goal, we need to tackle all the barriers to breastfeeding,” said Mr. Lake and Dr. Chan. “Governments should lead the charge by making breastfeeding a policy priority in national development plans, increasing resources for programming that supports breastfeeding, and working with communities and families to promote the full benefits of breastfeeding.”

Also, more must be done to overcome an obstacle that prevents potentially millions of women from breastfeeding: Workplace policies that do not support the right of working mothers to breastfeed their babies on the job.

Today, of the approximately 830 million women workers in the world, the majority do not benefit from workplace policies that support nursing mothers, and this figure does not include women working in informal, seasonal or part-time employment – often the poorest women in poorer countries – who may face even greater barriers to continued breastfeeding. This is not only a loss to working mothers and their babies. It is also a loss to employers.

Working mothers with adequate maternity benefits, including a breastfeeding-supportive workplace, report increased job satisfaction and greater loyalty to their employers. Breastfed children fall sick less often, so their mothers are also less frequently absent from work. These effects in turn contribute to higher productivity – ultimately benefiting businesses and the larger economies to which they contribute.

Recognizing these connections, the UN International Labour Organization (ILO) has adopted three Conventions to establish protective measures for pregnant women and new mothers – including the right to continue breastfeeding – and to promote feasible options for women who are outside formal work settings. Globally, 67 countries have ratified at least one of the three maternity protection conventions.

The UN officials stressed that more governments should join the growing movement and take action to implement these important protections.

“We know that breastfeeding improves the lives of millions of children and ultimately benefits families, communities, and societies. Our challenge now is to make breastfeeding work in the workplace, too. Together, we can help working women to breastfeed and reap the benefits for themselves, for their children, and for the health and well-being of future generations.”

WHO recommends exclusive breastfeeding to begin within one hour after birth until six months of age. Nutritious complementary foods should then be added while continuing to breastfeed for up to two years or beyond.